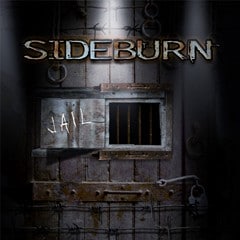 Review:
Remember those kits you used to get when you were a kid with a load of paint and a board with a picture on it all covered in numbers? ‘Painting By Numbers’ it was called, and the new album from Switzerland’s Sideburn is essentially ‘AC/DC By Numbers’. If you like post For Those About To Rock era AC/DC, then Sideburn‘s Jail will appeal to you enormously. For me however, that is when the Aussie legends just became a parody of themselves — and emulating that era is, in my book, not a recipe for success.

Nothing on Jail is essentially bad — on the contrary, some of it is very cool — very ‘cruising down the highway with the top down’ type stuff. But it’s like Sideburn recorded the entire album with the brakes on. It never gets going and it never makes you feel like you’re flying by the seat of your pants the way Airbourne or Bullet do.

Sideburn‘s earlier releases seem rougher around the edges compared to the polish of the Beau Hill mixed Jail, and are far better for it in my opinion. This type of rock ‘n’ roll should be played whilst wearing road weary, scabby jeans and a five day old t-shirt, not with a set of brand new Levi’s with a crease down the front and your shirt tucked in.

The stand out track for me is “Good Boy”, where Sideburn stretch their legs a little and forget their AC/DC fixation and instead have a bit of fun pretending to be Judas Priest by blatantly stealing the “Hell Bent For Leather” chorus. On the whole though, if you want to listen to 12 tracks of Fly On The Wall outtakes you’ll enjoy this offering. But if you don’t fancy sitting through the equivalent of a pile of Young brother cast-offs you’d be better off spending your hard earned money on the new Bullet album.