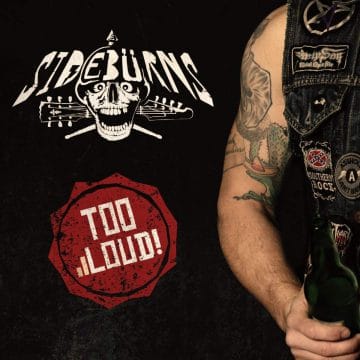 Review:
Since being introduced to the old yet edgy West German culture during most of the ’70s and a smidge of the early ’80s, I have carried around a love for many things German in my western world traveled heart. Love me some pommes frites, rarely turn down a good bratwurst, enjoy the occasional cold German beer, and damn if I don’t like my hard rock and metal the way I first experienced it in Germany in the late ’70s – gut und laut!

While my last stay just outside of Frankfurt exposed me to even more than my diverse musical heart had already dragged across the ocean, what I mostly took away from the three year tour was a love for some heavy bands like Iron Maiden, Saxon, and the grizzled in your face barrage of punk laced metal awesomeness of Mötorhead. Yeah, there was a bit of cool native rock and roll from the likes of Scorpions and their more aggressive two-guitar counterparts Accept but what really grabbed me was this ugly as sin trio that the German metalheads around me absolutely loved – Mötorhead. Since then, many have tried to channel a similar energy and sound but the vast majority end up coaxing little more than a mere shrug from this here rocker so when faced with the task of a band even slightly put in similar company as Mötorhead, I tend to listen with cautious ears. Such was the case when reviewing the ballsy titled latest release from German trio Sidebürns — Too Loud.

On first listen, I was drawn by the initial raw energy of this band that off the bat screams for a cramped spot on a dirt, blood, and beer soaked biker bar stage where the jukebox is loaded with tunes from the likes of MC5, AC/DC, Rose Tattoo, Black Sabbath, and of course, that other dirty and rough umlaut smacked trio, Mötorhead. And much like Lemmy and the boys, Sidebürns play loud, simple, fast music meant to get sloppy drunk and unpretty to except that one of ’ems a gal and even so, it might take a few beers and a gander at Lemmy himself to think her even a bit cute. Hey, that’s not a knock. One view of the video for the title track with Nellie Olsen with a weird bob-cut bassist Katja BaroneSS rocking out on top of a bar with just as simply rough looking guitarist/singer Ralf Sidebürn and drummer Ronny G. Hämmer (man Germans freaking love those umlauts!) is enough to steer clear for fear of getting a nuclear bomb level ass kicking. And that’s just from the bass player, never mind that the most energetic body on the bar is a barely dressed stripper spinning around a pole front and center.

Forget whether or not it’s tasteless in today’s PC world, Sidebürns could give two shits as they plow through bitchin’ tunes like “All Gone”, which launches the record in a way that would make Quentin Tarantino hungry for a buffet of spaghetti westerns seasoned with every topping that would offend the average over achiever. Much like Mötorhead, it’s metal built on a punk, rockabilly, classic hard rock frame and spitting out enough smoke to pollute even the tallest point of the Zugspitze. Ralf Sidebürn‘s growl might make Lemmy sound almost pop like with the difference being that you can mostly understand Lemmy. In addition, Lemmy manages to churn out lyrics that border somewhere near literary but hey, I did mention that Sidebürns really could give two shits right? It’d be one thing if they had this false bravado that what they were creating was some kind of artistic form of politically meaningful expression but nah, these Sidebürns just wanna rock and fuckin’ roll. Looks and charm? Wtf is that? So it might not be “Ace of Spades” but as far as loud, sweaty, stinking beer drinking music goes, turn it up!

Keeping in mind that there are a buttload of rockers out there living to get to that carefree weekend that many of us daydream about at the job on the days leading up to Friday night, Too Loud is uncomplicated vent rock and roll designed to let the crowd cut loose. BaroneSS drops a bass line on ”Fine Lines” that with enough beer makes it possible for even the burliest of bikers to get their dance on and if snarling, snotty, punky attitude is more your thing, “Whiskey, Cigarettes & the Truth” has all of that in spades. The vocal is deeply menacing and dang if it don’t have a guitar solo that is so perfectly spot on that it’s nearly criminal. Forget that no one will even toss the shred label near this band, this stuff rocks!

Speaking of punky, “From Here On” speeds by like a bit of charged up, chaffed Social Distortion with even more kick the knees bass guitar and “Mr. Sidebürn” comes off like a cool cat mix of Lemmy fronting the Stray Cats. Kind of prepares for the straight middle of the road rock and roll of “Got Burned” which just may be the closest Sidebürns get to mainstream but don’t let that scare you, it still rocks in a raw sweet way that lands somewhere between the New York Dolls and early Hanoi Rocks but with far less spit and shine. If even that thought ruffles your feathers enough to worry that Sidebürns might be heading down easy street, well just get those ideas out of the rosebush. This unapologetic trio polish off things with a double barrel shot of heavy ‘tude rock courtesy of “Hit You Like a Tank”, a blistering Mötorhead lovin’ tune that has an “Eat The Rich” sort of vibe to it before finishing off with the grinding “Rock ‘N’ Roll Apocalypse”, a seven minute hard rock and roll anthem for the new metal kids. Extra cool seeing as the next generation needs as many battle cries as they can get to keep metal alive until at least hell freezes over.

Sidebürns‘ latest and greatest ain’t gonna change any games and it sure ain’t gonna make anyone overthink any ideas of straight to the point three chord raw rock and roll. Heck, if anything, it probably won’t do much more than make a bunch of pent up working class cats use it as a loud excuse to burn a few ties and cut loose which is cool. What else would a bunch of loud, dirty rockers want other than to be antagonists for a much needed good time? Yeah, Sidebürns might not be everyone’s cup of tea but why would they give a crap when they’d rather be someone’s glass of draught beer? And for that lot, Sidebürns will never be Too Loud.