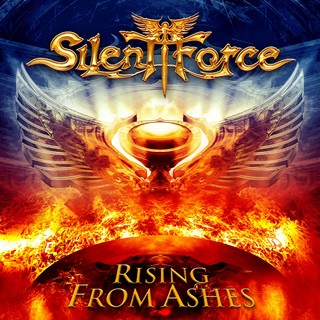 Review:
The word of the day is ‘power’. Silent Force was formed in 1999 in Germany by guitarist Alex Beyrodt, and after several line-up changes the band came upon their present form. However, there is nothing ‘silent’ about Silent Force, they loudly stake their claim as a friggin’ awesome band!

It’s kind of redundant to say that Silent Force is talented — if you can play progressive or power metal that goes without saying, so I won’t say it anymore! I’ve recently discovered all the amazing prog/power metal coming out of Europe lately, and I’ve been blogging about it — this is a band that would have fit very nicely in that blog series.

Rising From The Ashes grabs you by the throat, and doesn’t let go right off the bat. While this is progressive metal, there are several songs, like “Circle Of Trust”, that even though they are technical, a non musician would be able to get into them. It kind of reminds me of what The Winery Dogs might sound like if they had decided to play metal instead of rock — in fact, I hear that in several songs. I’m not saying Silent Force sound like The Winery Dogs, I just hear some similar techniques in certain things like catchy chorus structures and incredible backup vocals. I hear a very solid rhythm section that is its own beast, while the guitar, vocals and keyboards join to round out the onslaught. It should be noted that the bass player’s name is Mat Sinner (of Sinner and Primal Fear) — can you get anymore metal than that?

Singer Michael Bormann has a very diverse voice and is very impressive. His range is multiple octaves and he has several different styles that he sings in — smooth, raspy, high, mid, and low. For example, during “You Gotta Kick It” (which is a painful reminder that football season is over) he goes from low/mid to high in a gradual progression. “Turn Me Loose” is another one that has mass appeal — it starts off with a fun keyboard intro, and plays in a blues sound throughout the song, and is complimented by a dueling solo between the keyboard and guitar. It has another catchy chorus too — you could say that they ‘turned it loose’ on these solos.

Another thing I like about Rising From The Ashes is how close the keyboard and guitar are to each other. I’ve never heard a keyboard player who plays it the way one would play a guitar and have it sound like a keyboard, yet perfectly fit with the guitar — ok, I’m having a hard time explaining what I’m talking about. Just listen to “Anytime Anywhere” and you’ll understand what I mean. Alessandro Del Vecchio is in the same class of keyboard players as Kevin Moore, formerly of Dream Theater. The album doesn’t have any ballads on it — its pure, powerful, and beautiful metal throughout. However, your girlfriend will like this band too.

One thing I’ve noticed about all the European power metal bands is that while they are melodic, technical, and heavy, their music appeals to more than just metal-head musicians. If promoted correctly, this music could become mainstream in the US — its even beginning to catch on here. I’m certainly going to do whatever I can to help and hopefully someday soon, we’ll have a European Invasion of great heavy metal.