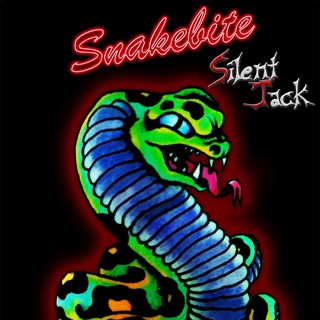 Review:
Are you one of those sleaze metal fanatics who long for the return of underrated icons such as Junkyard? If so, and you’ve tired of waiting, then the UK bred rockers known as Silent Jack is the band just for you. Trust me, this short little release sounds as if it was discovered in a stack of demo tapes submitted to record executives in the late ’80s.

The Junkyard comparisons are unavoidable for Silent Jack, simply because Rich ‘Stitch’ Mason sounds so much like David Roach throughout this seven song debut. However the similarities don’t end there, as “King Cobra” sounds so uncannily like “Hollywood” at times that you may mistake what band you’re actually listening to. Silent Jack isn’t a one-trick pony though. “Brand New Start” for instance is a fairly heavy platter of sleaze with a hard hitting beat, something that surfaces several times throughout Snakebite, while the rollicking “Going Down” almost becomes a heavy handed glam number. When Silent Jack tackles a ballad, which they do on “Angels Cry”, a Skid Row sounding influence quickly surfaces. Closing out this mini album is “Hot Luvin'” (the title track from their 2012 debut EP), a dark and thumping foot-stomper that ends the proceedings on a high note.

There is no denying Snakebite is a little rough around the edges, but if you want nothing more than to revisit the golden age of sleazy ’80s hair metal, Silent Jack fit like a well-worn pair of spandex pants. The band could use the direction of a well-schooled producer, one who could successfully bring out the killer sounding rhythm section and give the backing vocals more polish. However, for a first effort I really can’t complain too much because Snakebite is dripping with sleaze and is anything but ‘silent’ — just the way I like it.