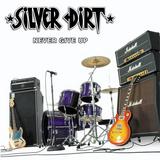 Review:
I swear that some musicians are born with a feel for rhythm, and the members of Silver Dirt are a prime example. It’s been three years since these Swiss rockers released Sonic Boom and in that time they haven’t wavered from their stripped-down retro rock swagger.

Some bands manage to stumble upon greatness, and this time Silver Dirt has done it with the song “Barfly”. The song is driven by the bass and a steady beat in the beginning, with guitars calmly interjecting occasionally as if the guitarist simply feels the urge to strum a chord. Then, half way through, the guitars explode and take over the song – it reminds me of Salty Dog‘s “Come Along”, not so much in sound but in style of delivery. This song demonstrates Silver Dirt at their best while separating them from the crowded rock scene and making them unique.

It is when the incredible rhythm section perfectly gels with the crisp guitars that Silver Dirt really stands out, as shown on “Somebody Help Me”, “Leave It Alone” and “So Many Times”. There is one problem with this release though, and that is that it often comes across as being lazy. Granted the band aren’t the heaviest rockers in the land, but their laid-back approach sometimes offers too little excitement. Other times, as shown on the punk influenced “Alright”, the guys completely miss the mark, making for an uneasy listen.

When Silver Dirt are on top of their game they have a sense of rhythm that would make thousands envious, but Never Give Up is just too inconsistent to be considered great. The band’s D-A-D meets the Rolling Stones sound sets them apart from the crowd, but to really stand out they are going to have to focus and streamline their sound. I hope they take the advice of this CD’s title, and create their masterpiece.