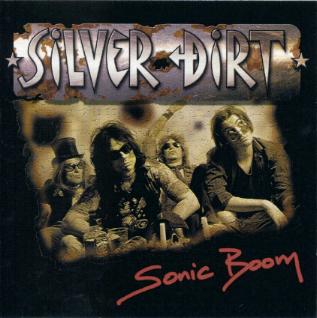 Review:
A band who started out as a Zeppelin cover-band have paid their dues and has made their way into sleaze rock. Without paying any attention to what is out there for music today, they play their guitars loud and they play with their own set of rules.

Silver Dirt has a sound that is nearly extinct in the rock and roll world today. Whether it’s a live show or on the album, you can hear the dirty rock and roll of the 70’s and 80’s apparent in their art. Their sound is very much like their influences of the Rolling Stones, AC/DC and Iggy Pop. Each song is filled with catchy power chords that pay tribute to rock and roll and the feeling of style that rock and roll presents to us.

The album is filled with passion and love for a time when rock and roll was everything and everything was rock and roll. With that passion is power but they mix so well together that they blur together and it’s a perfect match.

The members of Silver Dirt are guys who live for rock and roll and have a story to tell through their songs and through their music. They even have a song dedicated to the great artists and the great songs that have influenced them: “About Rock ‘N’ Roll”, which mentions a lot of the bands and songs that are about rock and roll excess and life on the road.

The feeling of this record is nothing short of a rock and roll party with no limits to what can occur. Each song is distinct and has a sound like none of the others, and the album has the music on it to be one of the top rock and roll albums of the time.

The band is truly at home when making music and this album is proof of that. They have the talent, the sound and the music to become a name in rock and roll!

Review:
“Hey you, crank up the volume it’s a rock ‘n’ roll record goddamn it!” That is the opening line from Switzerland’s Silver Dirt and are words that describe Sonic Boom perfectly. There is no flash or outrageousness here, it is simply a collection of stripped-down guitar oriented rockers that harkens back to the golden age of rock ‘n’ roll – the age in which song structure was more important than image.

I first heard of these guys through Perris Records’ Hollywood Hairspray 5 compilation and named them as one of the most surprising bands on the disc due to the excellent “Go! She Said”. Ironically Silver Dirt started out as a Led Zeppelin cover band, but this release doesn’t follow Led Zep‘s majestic leanings (aside from “Angel With Silver Wings”). Instead it dives headfirst into the simplified sounds of 70s garage rock, the Rolling Stones, Gilby Clarke and even AC/DC.

Some of these songs are simply great, like the aforementioned “Go! She Said” and the raunchy “Wasted Dream”. Also the no-frills rockers “About Rock ‘N’ Roll” and “Mean Machine” have a three-chord swagger that would make AC/DC proud. The guitar riff on the seven plus minute epic “Angel With Silver Wings” is a memorable one, but the solo itself seems to lose focus. A better epic is the closing southern-fried “Freedom Haven” which is a cross between Tesla and Raging Slab‘s “Good Morning Little Schoolgirl”. I thought “She’s Got To Be” was going to wander too deep into punk territory for my liking, but it ended up being a fun retro rock number. And the band perfects the Rolling Stones‘ “The Last Time”. It has a similar feel to old Amboy Dukes material and I couldn’t help but wonder if this is what the Dave Clark Five would have
sounded like is they had arrived in this decade as opposed to the 60s British Invasion.

Don’t expect to hear anything really groundbreaking on Sonic Boom, but do expect to hear awesome guitar driven rock ‘n’ roll. This is the type of music that goes over well at an outdoor festival with ample amounts of alcohol – I like it.