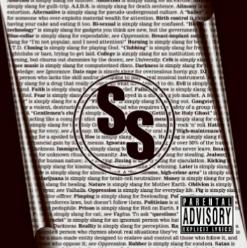 Review:
Chicago’s Simply Slang sound like a cross between the punk of Billy Idol and the sleaze of Circus Of Power mixed with some classic rock elements. This is essentially a re-release of the bands self-produced demos and the mix is rather tinny, it sounds like the band recorded these songs in a metal dumpster – similar to the production (lack-of) that plagued so many Sunset Strip glamsters in the late 80s. A heavier and crisper production would have served the band well, but I can forgive a sub-par production if the music is top notch.

As I begin listening to this disc a feeling of indifference overcomes me. “Live 4 The Weekend” and “Rock & Roll Chain Gang” are good rockers – but not great – and there just doesn’t seem to be enough on display to separate Simply Slang from the hundreds of other punk meets sleaze rockers. In fact “Rock & Roll Chain Gang” sounds like it could have been a leftover unfinished demo by Circus Of Power. I can’t figure out why the guys recorded “The Star-Spangled Banner” – it definitely isn’t what I would call a rock anthem and it stays too true to the original. If they would have completely revamped it like Jimi Hendrix did some thirty years ago it might have been a worthwhile addition, but in this form it isn’t.

So just as I was about to write Simply Slang off as a mediocre band that needs some polish along came “Angeline”. Now this is an incredible song and I wish there were more tunes like it on this EP. As I keep listening to “Angeline” I am constantly reminded of the Rolling Stone‘s “Angie”, even though the two songs have little in common. “Angeline” is far more up-tempo than “Angie”, but there is just something about the vocal on the chorus that reminds me of Mick Jagger‘s heartfelt urgency. Simply put, Simply Slang are a little rough around the edges, but as the final cut on their EP proved, they have the potential to create something beautiful. Now if they can just harness all their creative talent – and straighten out the production – their future could be very bright. Simply Slang songs can be found at both www.simplyslang.com and
www.platinumrealm.com, make sure you check out “Angeline”.