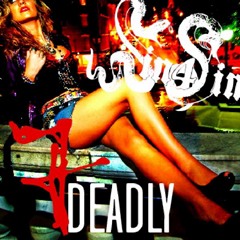 Review:
If you’re one of those people that salivate over the idea of the original Skid Row reforming, look no further than Baltimore, Maryland’s Sin 4 Sin. Barely a year old, Sin 4 Sin benefit from being young and inexperienced — playing music without trying to fit in or being steered into a certain direction.

From the opening track “Love Vice” Sin 4 Sin play dirty sleaze rock with some rapid-fire drumming, and the fact vocalist Brandon Hayden sounds so much like Sebastian Bach is an added bonus. I’m not so sure Bach himself could scream like this anymore without his voice cracking — there is something to be said for being young! On “Fast, Hot, Sleazy” the Bach comparisons take a back seat as the song stumbles out of the gate but it slowly builds itself up into something special — I especially like how the band works the lyrics. It’s back to the gritty screams on “She Can Pay The Bills In Ones”, a song that could be the band’s ‘hit’ single with its ’70s inspired guitar tone, before Sin 4 Sin get even heavier on “Buy Me A Drink” which could easily become a sleaze staple in the same vein as “Monkey Business”.

Sin 4 Sin may be young, and don’t exactly look the part (although they have the right idea with the sexy artwork), but these guys understand what sleaze is. They’re revamped the line-up since putting out the 7 Deadly EP, and the addition of a second guitarist can only make Sin 4 Sin better. Keep an eye on these guys… they have a hell of a lot of promise!