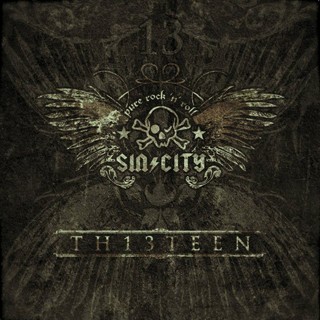 Review:
You don’t have to be a world renowned psychic to figure out what this German band is all about. With the moniker of Sin/City, complete with lightning bolt, there is no denying what famous rock band has heavily influenced this foursome. Before you think ‘oh great, yet another new AC/DC clone’, you should realize that Sin/City have been slugging it out for twenty years now and, despite its title, Th13teen represents the group’s fourth studio album.

Originality is practically a four-letter word to a band like Sin/City, but what they lack in terms of innovation they more than make up for with spine-tingling heavy rock. You could argue that AC/DC hasn’t sounded this inspired since 1983’s Flick Of The Switch, and for those us that long for a return of the famous Aussie’s rawer roots and swagger Th13teen is just what the doctor ordered. The Young brothers would likely kill to be able to write songs as energetic as “Tires On Fire”, “Harder Than A Stone” (which kicks the shit out of “Hard As A Rock”), the destined to be crowd favorite “Addicted To Rock” and “Give It Up” once again, but I fear those days may be long gone.

Scoring the legendary Rhino Bucket to appear at Th13teen‘s record release party is not only an obvious choice but also demonstrates that when it comes to AC/DC doppelgangers Sin/City rank with the best. If AC/DC really wanted to extend their careers without appearing old and washed-up they’d be well served to commission these German’s to write a few slabs of shit-kicking three-chord magic for any future albums.

The human species is essentially a predictable creature, with simple needs, wants and desires, and it is those basic instincts that Sin/City caters to. You don’t have to be the flashiest guitarist, or fastest drummer, or have a five-octave vocal range to capture the true essence of down ‘n’ dirty hard rock. If you don’t believe me, spin Th13teen and prepare to eat your words.