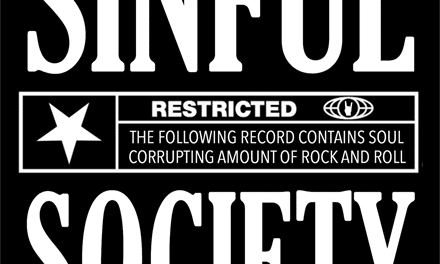 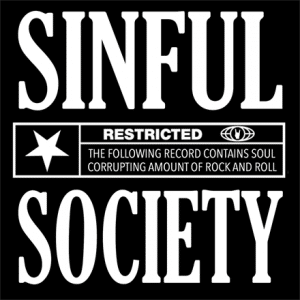 Review:
There seems to be a proliferation of female fronted hard rock/heavy metal bands these days. It seems to be the “next” fad. There’s nothing wrong with that as I have always enjoyed a female voice over metal music. In fact, I can’t think of one female metal vocalist that has a “bad” voice while I can think of many male metal vocalists whose voices leaves to be desired.

Sinful Society are fronted by frontwoman Riina Tuulia and boast an interesting blend of ’80s metal with some modern overtones to it. I have been repeatedly listening to Sinful Society‘s debut four song EP as “background music” while I work and although I enjoy all the tracks or rather do not dislike any, none really stand out that much either aside from the last song “Psycho City” with its memorable guitar riff. And that is really my assessment of Sinful Society‘s debut EP — four enjoyable songs but nothing that stands out head and shoulder above the rest or makes me really pine to hear these songs. Maybe it’s the lack of big chorus or hook to make me remember any of the songs. Delving a little deeper into the songs, I would rank them as follows: (1) “Psycho City”; (2) “Let Me Burn”; (3) “Are You Ready?”; and, (4) “On The Run” with the last ranked song straying a little too much into pop rock territory — albeit a harder edged territory — for me. I do like guitarist Eemeli Tammero‘s guitar  licks and solos throughout Sinful Society and Tuulia‘s slightly raspy vocal delivery reminds me of Sass Jordan‘s voice in some ways.

Overall, Sinful Society have delivered a solid debut EP, which has me intrigued enough to see/hear what they come up with next. On a side note, I have noticed that iTunes calls Sinful Society‘s debut EP as EP 2016 but I have no clue how they got such a title since the CD copy that I have makes no reference to these two words.

Sinful Society – Are You Ready?