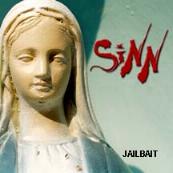 Review:
Sinn is the brainchild of Tommy Krash, a man that obviously has a fascination with the darker side of 80’s glam rock. Krash also possesses a gritty (and at times whiney) — almost nasal — vocal delivery that fits Sinn‘s gutter rock perfectly.

“Find A Way” borders on being a ballad, and stands out from the other tracks with its unforgettable trippy guitar vibe. “Science Girl”, which starts off being rather pedestrian, slowly taking unpredictable twists and turns until it morphs into a Doors tune. “Too Late” is Sinn at its sleazy peak — gritty, dirty and downright nasty. But it is “Almost 16” that has the sing a-long chorus we have all come to admire.

Jailbait is an extremely entertaining album, even if it isn’t breaking any new ground — but this is hard rock, not a cure for cancer. In fact, music like this is more likely to spread a disease then cure one. If you like your music on the sleazy and dirty side, Sinn is your band!