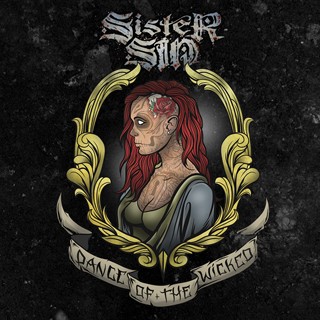 Review:
If there is one album that is very hard to find from a fairly established band it has to be Sister Sin‘s original release of their debut CD Dance Of The Wicked. I know first-hand because a few months prior to finding out about the re-release of the band’s underrated debut I set my sights on trying to buy a copy of the original release. After quite a bit of searching on the internet, and while on my fourth Google page, I finally found one site that was still selling the CD — persistence paid off! A few weeks later an original copy of Dance Of The Wicked was shipped all the way from Ukraine to Canada. I thought that I had bought a new copy of the CD but I think that I received a used one — it certainly appeared used and a bit abused — and the oddly placed shrink wrap around the CD spoke volumes. Nevertheless, I was happy to add Dance Of The Wicked to my collection.

Ironically enough, prior to eventually finding a copy of Dance Of The Wicked, I had contacted Sister Sin via their website to find out how I could obtain a copy of the album and subsequent demos. I never did get a response, but now I understand why. Fast forward a few months and Sister Sin announced that they were re-releasing their debut in a remastered format and packing it with extra goodies including unreleased demos and a DVD containing all of their videos. Talk about getting value for your money! I would have gladly bought the Dance Of The Wicked re-release only with its eight original songs.

For those familiar with Sister Sin‘s music ever since their 2007 EP Smash The Silence — another hard to find release (but to a much lesser extent) — the band has developed a very identifiable sound of intense in-your-face metal aggression. Dance Of The Wicked does not go in that vein — on their debut Sister Sin was more subdued, playing at a slower but still enjoyable pace. What makes the CD stand out is Liv Jagrell‘s vocals. Her voice on Dance Of The Wicked hardly sounds like her voice on latter albums. However her voice still sounds shock full of attitude, but in a punkish slower type of way. Frankly, her vocals are so good that I can’t help but singing along although the songs are definitely not your usual sing along type. Highlights include “Kiss The Sky”, “Fall Into My Dreams” and especially the verse portions of the title track “Dance Of The Wicked”.

Apparently Sister Sin only had a budget of around $2,000 when they first recorded Dance Of The Wicked, so the original CD sounds quite cheap and dated. With the remastering Dance Of The Wicked sounds fresher, more polished, and more on par sound quality wise with Sister Sin‘s subsequent releases. The best comparison that I can provide is the change in sound quality from Motley Crue‘s Too Fast For Love to Shout At The Devil. The guitars on the remastered version appear to have been given more emphasis while Liv‘s vocals have been turned down a notch. The only downside is that the remastered version does not sound quite as ‘live’ as the original release.

The bonus demo tracks are interesting ones. They sound heavier than the original tracks on the album and start the blueprint for Sister Sin‘s current sound — particularly during certain sections of “Head Over Heels For Love”. At the same time, some of the demo tracks demonstrate the band’s influences a little too much. For instance, the opening guitar riffs in “Minor You (Major Me)” appear to be a spin off (or rip off) of the riffs that can be found on Motley Crue‘s “Too Young To Fall In Love”. My favorite out of the three demo tracks has to be “Writings On The Wall”. The re-released Dance Of The Wicked closes with a rousing rendition of Motorhead‘s classic “Rock ‘N’ Roll”, complete with Doro Pesch. Throw in a DVD containing the band’s ten videos and you have a CD/DVD release well worth its price tag.

I get the impression, from a few of the interviews that I have read and the liner notes in the re-release sleeve, that Sister Sin are not that fond of the songs on the original Dance Of The Wicked CD. A big hint is that the band apparently stopped playing those songs live six months after the album was released back in 2003! Nevertheless, Sister Sin have obviously recognized that Dance Of The Wicked is an integral part of their history. It really is great news for all of the band’s followers that do not have the original release that they now have the opportunity to discover Sister Sin‘s roots and beginnings — every band has to start somewhere. Dance Of The Wicked will never be regarded as one of the great debut albums of all time, but it is an important chapter of Sister Sin‘s history — one which has be given the light of day once again.