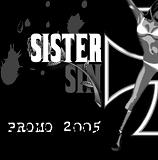 Review:
I usually don’t review mp3s, but seeing as our friends in Sister Sin are being screwed around by their record company I figured I would help get their name out there again. Maybe these record company politics setbacks were the best thing to happen to Sister Sin because they sound more aggressive and pissed-off than ever, and it makes for some great full-throttle metal.

“Minor You Major Me” storms out of the gates with a wall of guitar crunch like that of early Motley Crue – and then it hits, Liv‘s powerful voice. She has one of the best female metal voices this side of Doro Pesch and like Doro her beauty disguises the vocal beast within. When I reviewed their debut release I don’t remember this band being so dominating as every song on this promo is unrelenting. New guitarist Jimmy fills every song with early Crue riffs while the rest of the band keeps pace.

All three of these tunes flat out rock – so there must be some record company out there willing to take a chance on Sister Sin. If they could sustain this aggression for a full-length album it would be spectacular. In the meantime feel free to download this promo at www.sistersin.com, you won’t be disappointed!