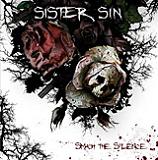 Review:
There was a time when music this powerful was performed strictly by men clad in leather and German midgets. Sweden’s Sister Sin has been doing their best to change that for over four years now, thrusting a sexy female vocalist front and center, a woman whose voice could rival any of the power metal legends. Unfortunately for them, Sister Sin has made little headway commercially, due in part to record business bullshit.

Smash The Silence is a short five song sucker-punch to the guts, bursting with attitude and aggression. In my ears the band comes across as a female fronted version of Accept (with pipes comparable to Skew Siskin‘s Nina C. Alice), sticking to a proven blueprint to deliver satisfying working-man’s metal.

The best songs are the first three. “Hostile-Violent” totally lives up to its title, a song that demands to be turned up to full volume as fists pump in the air and heads bang (if people still do that?). “Breaking New Ground” is a metal song complete with a gang-styled chorus and “On Parole” has the closest Sister Sin comes to a sing-a-long chorus.

With all these bands coming out of Sweden, Sister Sin seems to be blazing a different trail. Whereas the majority of Swedish upstarts that I review try and rehash the look and feel of 80s glam/sleaze, this band ditches that in favor of leather and forcefulness. Liv and company have yet to let me down, now if only they could catch a break!