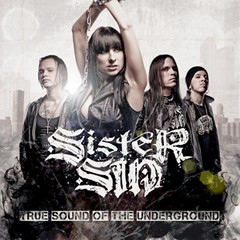 Review:
How Sister Sin would fare when bassist and principle songwriter Chris Bednarz left the band over a year ago was anyone’s guess. I’m not sure how they managed it, but the new songwriting duo of Jimmy Hiltula and Dave Sundberg have perfectly crafted a new set of Sister Sin songs without missing a beat. The crunchy guitars, powerful female vocals, gang choruses and angst driven fist-in-the-air anthems that we all love, and have come to expect, from these Swedish metal merchants have all returned in spades.

I’ve said it numerous times before, but I’ll say it again — in my opinion Liv is the premiere female vocalist in metal today. Her authoritative voice easily takes control of each song, singing with a confidence that occasionally borders on arrogance. Meanwhile, Jimmy offers a very unique guitar tone and style to the proceedings. It is probably those two distinct sounds that made the songwriting transition flow so effortlessly between Switchblade Serenades and True Sound Of The Underground.

“I want that teenage rampage, mayhem and outrage”, screams Liv on the album’s debut single “Outrage”, the blueprint for True Sound Of The Underground. That song finds Sister Sin at their metallic best, but “Sound Of The Underground”, “Heading For Hell”, “Beat Em Down” and a convincing cover of Udo Dirkschneider‘s “24/7” aren’t too far behind. The only minor complaint I have with this CD is the Neanderthal sounding gang vocals that are identical in every track.

Sister Sin really are, and have been for a few years now, a refreshing sound in the metal genre. True Sound Of The Underground continues to build upon the master plan set forth with Switchblade Serenades, resulting in the two albums being almost mirror images of each other.

Gothenburg, Sweden’s Sister Sin burst on the scene in 2003 with some self-released EP’s and singles before being signed to Victory in 2008. The label then issued the band’s true debut album, Switchblade Serenades, which created a buzz across North America. The band saw limited touring, but those who have seen them live have nothing but good things to say about the energetic performance — especially that of the gorgeous and charismatic singer Liv Sin.

This brings us to their follow up True Sound Of The Underground. A true measure of a band is what happens after a strong outing of the debut — this sorts out the real deal from the flashes in the pan. Continuing in the tradition of such greats as Motley Crue, Judas Priest and Accept with a little of attitude a la Motorhead and Sex Pistols is what you’ll get with True Sound Of The Underground. The production is superb and brings the old school vibe into modern times. The lyrical content leaves much to be desired, but this band isn’t a novel — this is rock ‘n’ roll with warts and all. The standout tracks are the first single “Outrage”, “Sound Of The Underground”, “Heading For Hell” and “The Devil I Know”.

Honesty is what has made some of the best bands in rock ‘n’ roll history. Hopefully by the time Sister Sin‘s run ends we’ll be able to add them to the list along with the greats in the genre.