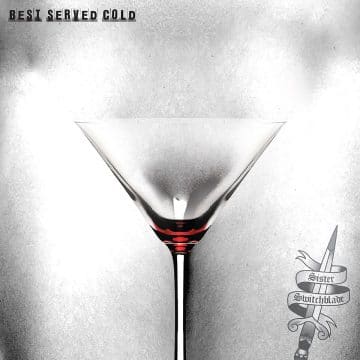 SISTER SWITCHBLADE
BEST SERVED COLD
To be released on May 13, 2017 (Independent)

While the faster rocking songs are quite good on Best Served Cold — more on that later — where the album does fall short is the ballads. Unfortunately, there are three of them — “Breathe,” “Sleeping With Snakes” and “My Midnight Monkey” — and I routinely skip each one of them when listening to the record. There just seems to be something missing on each of those ballads as they come off a little flat. I think a large part has to do with Smith‘s voice which works well for the heavier and faster tracks but can’t carry the ballads. Out of the three, “Sleeping With Snakes” is the best ballad and the one that I am most likely not to skip. The guitar solo presumably by Dylan Galant on “My Midnight Monkey” is quite good but too little, too late to save the song.

If you put aside the three ballads, Sister Switchblade‘s Best Served Cold is a phenomenal record. Smith excels at delivering the heavier mid-tempo rockers and his raspy voice fits those songs quite nicely. Great guitar riffs, some nice melodies, a good and timely use of background vocals and at times, some really cool guitar solos highlight each of the non-ballad tracks. My favorite songs on Best Served Cold are “Downtown” which probably has the best melodies of any of the tracks on the album and “Ground Zero” with its great opening guitar riff.

Simply put, if you like down and dirty sleaze rock, Sister Switchblade‘s eight faster paced tracks on Best Served Cold will more than satisfy! As for those three ballads, you may just want skip them like I do almost each time I listen to the album. Probably the best news pertaining to Sister Switchblade is that Smith is already hard at work on a second studio album so hopefully it won’t be long before we get some more new Sister Switchblade music and hopefully those two albums will be the catalyst to get Smith and his band touring outside of the rather isolated (but I am sure quite beautiful) area of Perth, Australia.

Band Member:
Andy Smith – vocals and all instruments except as noted below

Back To Babylon launch promo

Back To Babylon by Sister Switchblade. From the album ‘Best Served Cold’ available for download at cdbaby.com or contact sisterswitchblade@outlook.comOfficia…