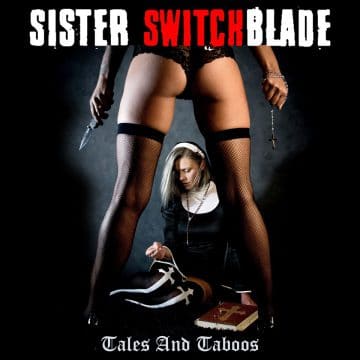 Review:
Perth, Australia sleaze rockers Sister Switchblade are back with their sophomore album Tales And Taboos. Gone are the ballads (thankfully) and it’s just one rocker after another from start to finish. Compared to the group’s debut album Best Served Cold, which was released back in 2017, Tales And Taboos looks like its more of band effort since frontman Andy Smith handled all the instruments on the debut record except for a few guest appearances. This time around, Smith has a band in place with Dylan Gallant (who contributed five guitar solos on the debut album) on guitar, Simon Brown on bass and Adam Bannister on drums.

There really isn’t one bad track on Tales And Taboos. There seems to be some Mötley Crüe influences at times such as on the acoustic opener “Tales And Taboos” and the third track “Ain’t Your Valentine” which reminds me specifically of a Crüe track (Dr. Feelgood era) that I unfortunately can’t remember the title to. I still love Mötley Crüe but with the influx of new music coming to the Sleaze Roxx headquarters, and having heard the Mötley classics over and over again, I rarely put on a Mötley record these days and the last time was when I reviewed The Dirt Soundtrack more than six months ago. Getting back to Sister Switchblade, if you like sleaze type bands, odds are that you’ll enjoy Tales And Taboos quite a bit. The one knock on the record is that although I enjoy the record every time I play it, I never really pine to hear it. That may be due to the absence of one real standout track. It feels that I often debate this when reviewing a record. Is it better to have one absolutely amazing over the top anthem such as Snakeskyn Whiskey‘s scorching track “Outta My Way” from their 2014 EP Against The World or have 12 solid tracks but no real anthem like Sister Switchblade offer on Tales And Taboos.

I like that Sister Switchblade bring a measured approach to their music allowing their songs to build slowly but surely like during the beginning of “Love Kinda Rusty.” It seems that every song is in lead vocalist Andy Smith’s vocal wheelhouse this time around compared to Best Served Cold where I found his vocals didn’t measure up that well on the slower ballad type tracks. The guitar work from Dylan Gallant is really good once again. The background vocals are timely and well done. As I listen to Tales And Taboos for the umpteenth time for the purposes of this review, it struck me that one reason that not one track really stands out is that all of the songs are of pretty much of the mid-tempo variety. Whatever the case, Tales And Taboos is enjoyable from start to finish, and that’s probably the biggest take away at the end of the day.

I must give props to the band for coming up with a cool album cover, which is way better than the one for their debut album Best Served Cold. Overall, Tales And Taboos is an album that any lover of ’80s styled sleaze rock will likely enjoy.