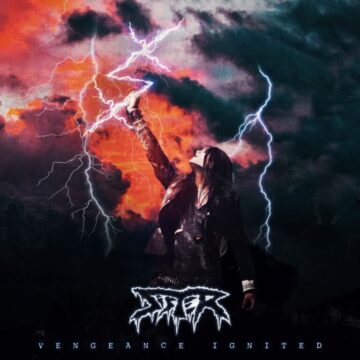 Review:
The last two years have been hard on all of us. The pandemic has changed how we live, it has driven us apart, and ahead is even more uncertainty. All that puts a strain on people to the point where we just want to scream out in frustration. Well, some good news, that primal screaming has been pretty well taken care of by Sister. The Swedish band makes a darker, heavier version of sleaze rock that fits the zeitgeist perfectly.

I really enjoyed their previous effort Stand Up, Forward, March! on which Crashdïet’s Martin Sweet performed bass duties. Even though Sweet is no longer part of Sister, Vengeance Ignited is at least as good and in my humble opinion, even better. The music is dark and heavy with enough melodic elements to appeal to the Sleaze Roxx audience. Maybe credit for that goes out to Jona Tee (H.E.A.T) who mixed and produced the album.

The album starts off with “Bring Out The Dead” that warms you up for the sinister mayhem ahead. Next up is the title track “Vengeance Ignited” with bit of a catchy chorus. “Spitfire” is a faster song with a punk rock attitude and brings us to “Scream For Pleasure”, one of my favorite songs on the album. From “Psycho Thrilling”, which is another solid track, we arrive at “Primal Rage.” Singer Jamie Anderson pulls it all out on this creepy track and it is the eerie highlight of the album. Be sure to find yourself grunting along pretty soon…

“Die With A Smile” is another catchy track, which with some imagination, could be considered the hit single of the album. “Walk With Me” follows suit and then there is another surprise — a ballad — but it’s unlike one you have ever heard. The raspy vocals of Anderson give “Whispering Winds” the dark dimension you’d now expect from the band. The album finishes off with “One Last Ride” and with a little over 36 minutes, the albums stops. Not too soon, not too late. It is, in all its extremes, a very balanced affair. That is quite an achievement.

Sister explore the outer limits of what I can musically take. Obviously, I like glam, sleaze and hair metal most of all, but I can also appreciate heavier bands like Slayer on occasion. Sister have found a well-crafted and clever balance between those sides. And their timing could not have been better as Vengeance Ignited is the perfect soundtrack to these unusual and frustrating times.

Sister‘s “Bring Out the Dead” video: