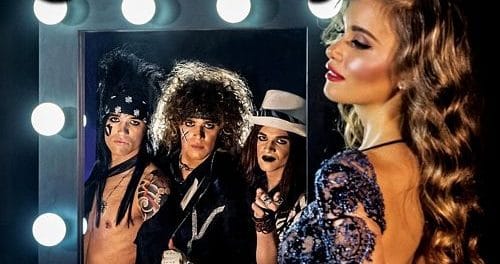 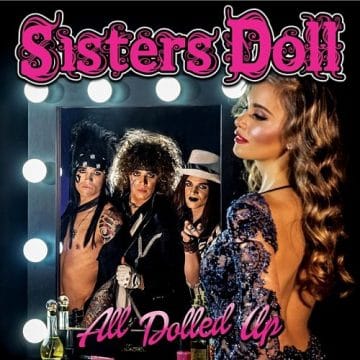 SISTERS DOLL
ALL DOLLED UP
Released in January 2017 (Sisters Doll)

Review:
This review is a rough one for me, and I will explain why a bit later. I was given this review to do because of my love for all things glam. Sisters Doll are a three piece from Australia, who also happen to be siblings. They play a very catchy, pop, anthem filled form of glam, which would not be out of place at all in the glam heyday of the early ’90s. Those that may or may not read my reviews know that I’m a huge fan of Tigertailz, especially the first two albums, and the latest from them — Blast. While a good album, it falls just a tad bit short in my overall expectations and so here is where my inner turmoil comes in. This CD is almost as good but not better than Tigertailz — good mind you, but real close. I hate saying that because I’m an ardent and loyal fan of the boys from Wales but this CD was just grabbing my attention a bit more.

When listening to All Dolled Up, I was struck numerous times by the similarities in the sound, the anthem-like quality of the songs and general good time approach.  Vocalist B. Monroe has a voice that is a cross between CJ Snare from Firehouse and new Tigertailz vocalist Rob Wylde. As with the Blast album from Tigertailz coming across as a bit more poppy and not as heavy as their earlier output, the same applies with Sisters Doll with extremely happy, good time rock n’ roll, pop-fueled anthems, such as “Good Day To Be Alive” and “Boulevard Of Dreams.” Listening to the different songs, you will hear tales of sex, women, good feelings, teenage angst and the wonderful rock n’ roll lifestyle of the young and the wild. I was finding myself drawn in and smiling numerous times on songs like “Old Enough.” I was nodding in agreement and saying “Yeah!” with the song “Young Forever” because I am a bit “older” (ahem) so this connected with me.

Sisters Doll tread a safe ground musically (not necessarily a bad thing) so this is not dangerous “street” glam, although lyrically, they are a bit suggestive, at times. Like I mentioned above, some songs sound very Firehouse like, with the prime candidates  being “Johnny,” “Together As One” and “Young, Wild & Free” with its voicing and the guitar leads being thrown around the song. Others are straight from the Tigertailz school of thought such as “Strutt,” “Old Enough” and even the obligatory ballad “Hurricane” which is a cross between the two bands. A great, clean production makes all songs heard and a fun listen. I just wish the drums were a tad fuller sounding and the bass, a bit louder in the mix because bassist Auzy has some cool little moments going on.

Now the other side of the coin. At 13 songs, it can be a bit long at a tad under an hour, so it can be a bit “samey” sounding at times. Lead vocalist B. Monroe doesn’t have a whole lot of dynamics to his voice but with the additional background vocals and harmonizing from the other members makes it interesting still and enjoyable to sing along with. “Dancing With The Devil” is a perfect example. This is a perfect song for driving in the car with windows down, singing out loud.

Reviewed By Will “Bones” Lee for Sleaze Roxx, April 2017