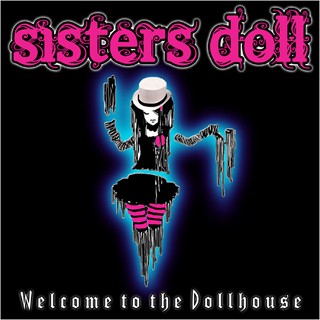 Review:
You would probably call bullshit if, after one listen, I told you this band is made up of three bothers — all in their teens. How about this… can Sisters Doll pay homage to ’80s glam even if none of them were born until after 1986? You can call bullshit all you want because these brothers have done just that — and they have done it well.

Welcome To The Dollhouse is a collection of hook and energy glam riffs that would have ruled the late eighties. The sound is young (in a good way) and the songwriting is mature (also in a good way). The first track, “Dollhouse”, captures the sound of… pick one, Poison, Firehouse, Alice Cooper, etc., and is accompanied by a video that is heavy on the lipstick and leather. The lyrics ‘welcome to the dollhouse/you’re not leaving, we’re not leaving tonight’ reminds me of just about every ‘dollhouse’ experience (aka strip club) I’ve had post five drinks. “Are You Scared Of Clowns” has a surprisingly (given the name of the song) positive message even if your answer is ‘yes’. Tracks three and four are where Sister Dolls‘ debut album really comes into its own. “Run Away” shows off the Australian’s heavy side while “Isabella” is a sleazy stalker song that, for me, validates that this band is more than just an influenced ‘eighties’ sound wannabe.

There is a ballad, “Lonely Room”, which didn’t work for me — it was too forced, sounding more like the Goo Goo Dolls stripped down. But Sisters Doll is quickly redeemed with the twisted “I Love Barbie”, the raging (a rare occurrence for this album) “Turn Around”, and then they roll out “Holly Dolly”, pretty much an anthem for teenage boys to score with girls — which is an awesome message! “Falling” closes out the album, and is another catchy tune that that would have filled the airwaves before the Mileto brothers were even born.

There are way more hits than misses on Welcome To The Dollhouse and I especially like the innocence to the songs that is probably directly related to the band members’ youth. No, this is not an album you throw on after you just did your last bump and are waiting for your escort to knock on the door. Instead this is the album you give to your kids after they bring home boy band music (breaking your heart) to teach them about rock and roll — without pulling out some ‘old man music’ like Motley Crue or Ratt. I like the album and love the fact that this band exists… it is encouraging!