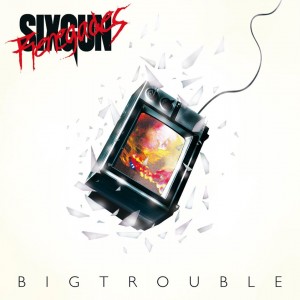 Review:
Finland is really starting to become more and more a hotbed for solid hard rock and heavy metal these last few years. It is not at the level of its neighbour Sweden by any means but definitely starting to catch up. Just a few of the many Finland based bands that come to mind include one of my favorites, the now defunct Wolfchild, as well as a slew of up and comers such as Shiraz Lane, Block Buster and now Sixgun Renegades.

I came across Sixgun Renegades a few days ago courtesy of the band’s drummer Teemu Räty. Upon viewing the video for “Renegade”, two things struck me. The guitar riffs sounded really cool and the lead singer’s vocals would take some getting used to and were likely a bit subpar compared to the rest of the music. That being said, I ended up playing the video “Renegade” a number of times and quickly got used to lead guitarist and vocalist Niko Räty‘s vocal delivery. Niko Räty‘s vocals are laced with a little bit of a presumably Finnish accent and his vocal register is limited but I have never been that picky when it comes to that stuff. You don’t have to be an opera singer to be successful as a singer in a hard rock or heavy metal band. That being said, Niko Räty‘s lead vocals are still the weakest part of any of the three tracks on Big Trouble.

I was actually very impressed with the variety offered by the three tracks — why only three tracks? — on Sixgun Renegades’ Big Trouble, which is presumably the band’s second EP which follows the Dangerous EP. The lead off single “Renegade” is a straight forward rocker with a cool guitar riff prevalent throughout the entire song. The chorus is simple: “Hey! Renegade!” — but it works quite well. Maybe some of the guys in Sixgun Renegades should be called riff masters because the title track “Big Trouble” starts off with a killer guitar riff before the track inexplicably strays away completely from that great initial guitar riff. The chorus on “Big Trouble” reminds me of a bit of early David Lee Roth solo era choruses. Although I enjoyed the direction that “Big Trouble” ended up taking, it seems a real shame to have wasted that killer guitar riff simply for the intro and ending parts of that song. On “Rock City Blues (Born Under A Bad Sign)”, Sixgun Renegades demonstrate that they can play different styles of music with a bluesy number where singer Niko Räty‘s voice gets a better chance to shine before the track speeds up and gets heavier about three quarters of the way based on another cool guitar riff.

Sixgun Renegades‘ Big Trouble EP took me by surprise. I did not expect that I would like the songs as much as I do, especially with Niko Räty‘s vocal delivery, but I am now really looking forward to hearing how the Finnish group follow up, hopefully, Big Trouble!