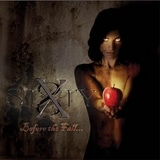 Review:
Listening to this relatively new band, one is immediately attached to the sound of bands like Puddle Of Mudd and Shinedown, except that Sixty 8 have cranked up the volume a tad more on Before The Fall…, their debut full-length album.

On songs like “Blood Red Sky,” the band are at their peak intensity wise, and also are able to showcase their talents. On the quasi ballad “Interactive,” Sixty 8‘s combative styles collide in a myriad of music; to this listener it sounds like they’re trying to go for a Nickelback style but can’t quite pull it off. The music isn’t bad but it could be a bit better. But this band is still new and trying to find its footing, so in the future they may be able to fully find their style and expand upon it.

The real highlight of the disc is “Any Race Of Man,” where the band tones everything down and are able to find their sound. Everything clicks here and the band are at their best.

All in all, Before The Fall… is a mixed bag from an up and coming band, but things look bright for them and here’s hoping for a whole album along the lines of “Any Race Of Man.”