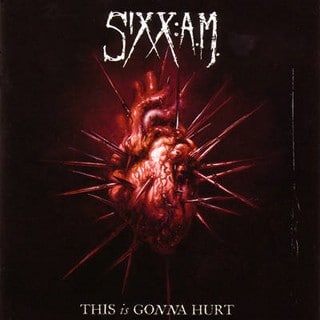 Review:
Nikki Sixx, DJ Ashba and James Michael, aka Sixx: A.M., are back with a second hard rock CD after a lengthy hiatus. But that’s not because they had writer’s block or (like a lot of other hard rock bands) had ‘problems’, it’s because Sixx: A.M. is after all a side project for DJ Ashba (guitar player in Guns ‘N Roses) and Nikki Sixx (bass player in Motley Crue) — who’s bands both released a CD and toured in support of them between The Heroin Diaries, its accompanying live CD Live Is Beautiful and This Is Gonna Hurt.

This Is Gonna Hurt starts off strong with the title-track, a modern hard rock song with a great headbanging sing-a-long chorus on which DJ Ashba shows off his ’80s metal influences while playing the solo. The first single “Lies Of The Beautiful People” is keeping the same rocking beat and “Are You With Me” is also pretty similar, though adding a bit of a modern touch to it. All-in-all, those are three great opening tracks.

The next song is “Live Forever” which sounds to me like a generic modern rock song, while “Sure Feels Right” is a cool summer slow finger-snappin’ song. However I must add that the first half of the CD is, in my opinion, stronger than the second part which includes no memorable tracks and kinda feels like a rehash of the first side or left-overs from The Heroin Diaries. There are a few good ones, and a few no-so-good ones, and while the rest of the songs are not bad in any way, they just don’t do it for me. They just come across as too modern and generic sounding.

The main difference between the two Sixx: A.M. studio albums is that this one, unlike its famous predecessor, really sounds like a rock album instead of a soundtrack — but what it lacks is an obvious hit in the vein of “Life Is Beautiful”. Also, DJ Ashba really stands out this time, playing some mean solos — I guess being in Guns N’ Roses does that to you. Either way, if you liked The Heroin Diaries, you will most definitely be digging This Is Gonna Hurt too. I definitely recommended this CD for fans of Beautiful Creatures, Brides Of Destruction and similar bands.