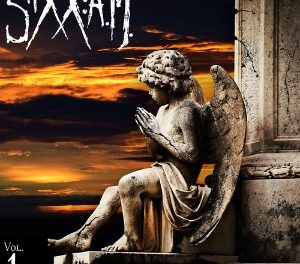 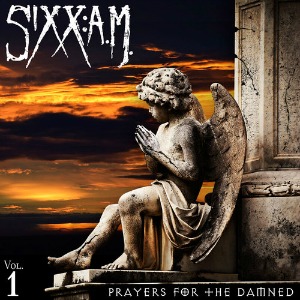 Review by Eduardo:
Prayers for the Damned, the new album from Sixx:A.M. has been out for almost two months now. I’ve been listening to it quite a bit since then and must admit being surprised that I haven’t been beaten to the punch of doing a review by another Sleaze Roxx writer.

Maybe Sixx:A.M. is not as popular as I consider them, and if that’s the case… I think they should be. I, for one, am happy that Nikki Sixx has finally wrapped what seemed to be an eternal Mötley Crüe farewell tour, that DJ Ashba exited Guns N’ Roses, and that now their main focus will be this band.

Not to make any Mötley Crüe fans reading this angry — being one myself, but let’s be honest, at this point Sixx:A.M.‘s producing better, more consistent material. Of course, the genre is almost completely different (hard/sleaze vs. pop/rock), almost incomparable, but still the fact remains that Mötley Crüe‘s golden years were long gone.

For that matter, I feel that the aforementioned split attention of the members between bands resulted in Sixx:A.M. having been unable to equal the perfection level achieved by their first album, 2007’s The Heroin Diaries Soundtrack. Don’t get me wrong, This Is Gonna Hurt and Modern Vintage were both good and enjoyable records in their own regard, but neither had that same degree of infectiousness, consistency, and meaningful lyrics. Until now.

Prayers For The Damned brings back the memorable melodies, variety and, most importantly, the open-wounded honesty. In my book, Sixx has written some of the best songs of his career for Sixx:A.M. with tracks like “Prayers For The Damned” and “Better Man” two examples of that on this album.

The subject matter of the whole album is every human’s internal battle between good and evil. Lyrics and execution are both very emotional and dig deep into gut-wrenching, brutal and always heartfelt emotional territory.

Prayers For The Damned is a powerful album, full of musical and emotional high notes. James Michael‘s vocals are impeccable — no surprise there. He shows off his vocal range beautifully. Sixx does what he does best; he delivers a steady, grooving bass line, and DJ Ashba plays his heart out on the classic rock guitar solos. It’s obvious these musicians are enjoying themselves here, and that Sixx:A.M. is a labor of love for them. Let Vol. 2 come.

Review by Olivier:
I’ll be honest here. A lot of the Sleaze Roxx writers have very different tastes in music. What one Sleaze Roxx writer might really like, another may actually hate. Usually, most of us will agree on the classic albums but the records that ride the perimeter of what Sleaze Roxx might cover sometimes create a lot of debate and generate very different reviews among some Sleaze Roxx writers. I, for one, am admittedly the traditional sleaze rock / metal guy who has had a hard time branching out and appreciating new styles of hard rock / metal music such as nu-metal, symphonic metal and/or progressive metal. In some ways, my taste in music is pretty close (with a few likely exceptions) to what former Sleaze Roxx editor Skid championed on the site for over a decade. That being said, there are a few Sleaze Roxx writers who enjoy a lot of different kinds of hard rock and metal music, and who from time to time might provide a review that I do not necessarily agree with.

One example is when Sleaze Roxx writer Metal Headz Media, who has an admittedly very far reaching musical palate, reviewed Sevendust‘s new album Kill The Flaw and gave it pretty much two thumbs up. Having never really listened to Sevendust before, I listened to the album out of curiosity and found myself pretty much vowing never to listen to this band again. Accordingly. Sleaze Roxx delivered two very differing reviews for Sevendust‘s latest album. One Sleaze Roxx writer who shall remain nameless called my “technique” of adding my own review to one that I might not necessarily agree with as one that “undermines” the first review but I look at it more as providing different perspectives and a certain level of consistency to you the Sleaze Roxx readers.

Sixx:A.M. have been another group that I have mostly held my nose to simply on the basis that most of their songs did not resonate at all with me over the years. I think that I have always hoped that Mötley Crüe bassist Nikki Sixx would just keep playing Mötley Crüe type songs his entire career. Why change a winning formula? Obviously, that is not going to happen with Mötley Crüe having been put out to pasture so to speak and having only released one studio album (the impressive Saints Of Los Angeles) since 2000’s New Tattoo. In some ways, and although I have never been a fan of Sixx:A.M., it makes sense that Sixx would try to reinvent himself with different sounding music rather than continually have his music compared to his Mötley Crüe legacy.

Sleaze Roxx writer Eduardo is another contributor that has a much wider musical palate than I will ever likely acquire in my lifetime. Eduardo has undoubtedly turned me onto some amazing music such as Dracula‘s Swing Of Death, which ended up as the #6 album on Sleaze Roxx’s Top Ten Albums of 2015 but he has also suggested to me albums that he knows deep down inside that I will dislike and that I admittedly struggle to listen to. Accordingly, when Eduardo‘s very favourable review for Sixx:A.M.‘s new album Prayers For the Damned was ready to go, red flags popped up in my head and I decided to add my own two cents (i.e. another review) in case that another Sevendust album was upon us.

Funny enough, I really liked Sixx:A.M.‘s first single “Rise” from Prayers For The Damned when I first heard it a few months back. “Rise” is actually an upbeat song with a big chorus. Sure the music is a little different than the usual sleaze rock that you might get with classic L.A. Guns or Faster Pussycat but the song works well with lots of melody, tempos and that catchy engaging chorus. If Sixx:A.M.‘s entire album Prayers For The Damned had only songs in the same vein as “Rise”, it would indeed be a very good album. “You Have Come To The Right Place” is the next track and is another upbeat one. The slower tempos and weird distorted guitar sounds are definitely not my cup of tea but overall, the song rocks as well. Two for two thus far for Sixx:A.M. “I’m Sick” benefits from another big chorus but is not on the same level as the first two songs. Nevertheless, the song isn’t bad.

The title track “Prayers For The Damned” is one of the better songs. It just feels like more emphasis was placed on melody instead of distortion and modern sounds resulting in James Michael‘s singing and DJ Ashba‘s guitar solo really shining on this one. As I listened to the rest of Prayers For The Damned, there is definitely a certain formula that you can take from most of the songs on the album. You get the slower verses often with modern sounding tones before a rather catchy almost pop like chorus comes in to carry each song. Every song on Prayers For The Damned is at the very least decent (except for “When We Were Gods” which slow verses are just so dull and the “catchy” chorus can’t save the song) with some being more engaging than others.

Do I agree with Eduardo that Prayers For The Damned is the best (or perhaps second best after The Heroin Diaries Soundtrack) album that Sixx:A.M. have come up with? Yes. Is this an album that I will be playing many times in the years to come? No. Is this an album that I will likely enjoy whenever I do listen to it? Yes. Do I still wish that Nikki Sixx stopped playing in Sixx:A.M., resurrected Mötley Crüe and had the latter band deliver a worthy follow up to Saints Of Los Angeles. Definitely.

Reviewed by Eduardo and Olivier for Sleaze Roxx, June 2016

“Rise”! From Sixx:A.M.’s forthcoming album ‘Prayers for the Damned,’ out April 29. Pre-order the album NOW!Stream / Buy ‘Prayers For The Damned’: https://f…

The title track from Sixx:A.M.’s forthcoming album ‘Prayers for the Damned,’ out on April 29. Pre-order the album NOW!Stream / Buy ‘Prayers For The Damned’:…