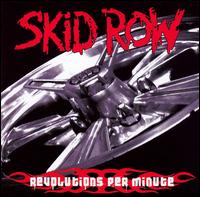 Review:
There was a time in the middle to late 90s when several hair bands mistakenly believed they could change their sound/look to be accepted into a genre in which they didn’t belong – this sounds like one of those albums. What possesses some of these bands into believing they are something they aren’t? Skid Row is an 80s rock/metal band, and a fucking great one at that – they aren’t punk rockers, or whatever else they are trying to attempt on Revolutions Per Minute.

I don’t hate Revolutions Per Minute, but to me this isn’t a Skid Row album – it is too far removed from what made Skid Row great in the first place. Gone are the harmonies and memorable solos, and I can count the songs that capture Skid Row‘s early greatness on one hand.

The best of the bunch is “White Trash” which has one of those choruses that I can’t get out of my head and some lyrics that are funny as hell. “Shut Up Baby, I Love You” is as close as vocalist Johnny Solinger comes to abrasive howl of original frontman Sebastian Bach, but it is the singing that saves “Disease”.

What is up with some of these songs though? “You Lie” is a redneck romp that a hung-over Junkyard might have tackled and “When God Can’t Wait” sounds like a Celtic barn burner (Flogging Molly anyone?). This is the new Skid Row CD is it not???

The sad thing about this album is vocalist Johnny Solinger. I have seen Skid Row live with Johnny and he totally impressed me with how he handled the old classics, but this CD will just give detractors more ammunition. Johnny and Skid Row are capable of so much better – let’s get back to basics guys and give the fans what they expect!