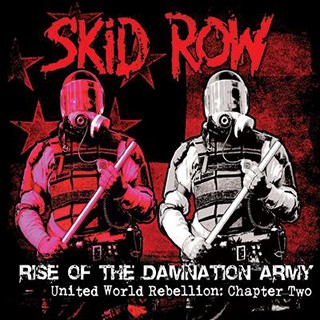 Review:
Its closing in on twenty years since Skid Row and Sebastian Bach parted company and endless insults have flown between the two factions ever since. They may not admit it publicly, but I have a feeling there is a strong rivalry between the two in terms of who is releasing the best music. Up till this point the band’s former blonde-maned frontman has had a monopoly in that department, but 2014 will go down as the year Skid Row has eclipsed their arch enemy. While Bach released the down-tuned snore fest known as Give ‘Em Hell, Skid Row finally returned to their roots with chapter two of their United World Rebellion EP series entitled Rise Of The Damnation Army.

Without a doubt this is Skid Row‘s best work with singer Johnny Solinger, finally giving the vocalist hard-hitting songs that can properly showcase his underrated talents. “We Are The Damned” comes storming out of the gates and returns the infamous rockers to that pissed-off sound that made them famous in the first place. The song not only sounds mean but also has a live feel to it, making it a great addition to the group’s collection of tunes. “Give It The Gun” is more of the same but is even better than the opener thanks to the killer guitar riffing that is on display throughout. “Catch Your Fall” slows things down and really showcases Solinger‘s pipes as he delivers a few screams and growls during the chorus that Bach himself would have trouble replicating these days — but it pales in comparison to something like “18 And Life”.

A thumping bass line propels “Damnation Army” while its over-the-top delivery and gang vocals transform it into Skid Row‘s latest anthem. The main EP ends with “Zero Day”, arguably the worst song here, although interesting for how much Solinger sounds like Quiet Riot‘s Kevin DuBrow at times. The bonus cover songs consist of Queen‘s “Sheer Heart Attack”, which takes a punk meets pop-rock turn, and a venomous rendition of Aerosmith‘s “Rats In The Cellar”.

Rise Of The Damnation Army is a damn fine release, and makes me wonder what the band was thinking during their first two underwhelming albums with Solinger. This is how Skid Row post-Bach should have always sounded — mean, nasty and annoyed. The production of the EP gives it a very heavy and live feel, which may not be clean enough for some listeners but seems to match the intensity of the music being provided. Sebastian Bach may be sitting around wondering why fans didn’t flock in droves to purchase his latest solo effort, but what he should really be contemplating is how he can recapture the Skid Row magic as well as Rise Of The Damnation Army does.