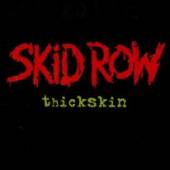 Review:
The day this album came out I ran down to a few record shops and was glared at as though I had three heads. “Skid Row?” They asked! Well, after fighting the desire to reach over the counter and….why don’t we move on before I make myself sound like a psycho?

I hunted down the album a few days later and couldn’t wait to pop it in. I listened to it about five or six times that night to make sure I gave it a fair shake. I also played it for a few friends and got their take. Their take was more or less the same as mine. The album is good, but it’s just too modern sounding.

What songs do I mean are too modern? “New Generation”, while a song I actually like, sounds far too much like a Manson song, who I don’t like at all. “Ghost” is a typical modern half asleep sounding song and “Swallow Me” is a decent song but just sounds so much like the rather dull metal that is on the air these days. Not even close to being as good as “18 & Life” or “Monkey Business”.

But, there are some good songs. “Born A Beggar”, for instance. Also good are “Thick Is The Skin”, “One Light”, “See You Around”, “Lamb”, “Down From Underground”, “Hittin’ A Wall”, and “I Remember You Two” all are very good songs and are songs that are not the “ho hum” boring metal (see Staind) of today.

If you are an 80’s metal band, why not release an album that sounds like an 80’s metal album? As much as I say this album is good, it cannot compare to their self-titled album or Slave To The Grind. Don’t be ashamed of who and what you are, changing it never works. But, for what it’s worth, all the songs, even the ones that are too modern sounding, are as good as if not better than what is on the radio today. So, why aren’t they being played in heavy rotation? Good question. I guess it’s because the boys are not puppets like the modern bands. Also, promotion of the album is horrible. There is no track listings or even a cover art photo on his page. Why not? It’s as big of a mystery as how many licks it takes to get to the tootsie roll center of a tootsie pop.

That said, give the boys credit for what they have done production wise, the entire album was produced by them. So…a few tunes that I could take or leave and a few that I really like a lot. Overall, I’d advise checking out a few songs and if you like what you hear, buy it. It’s up to us, as fans, to buy good albums when they do come out. Far too many good albums go unheard because of unprofessional promotion and because a modern boring band releases something and that gets full attention. If you are capable of buying an album with your heart, with your mind, with your soul, and not because somebody like MTV tells you to, buy Thicksin.