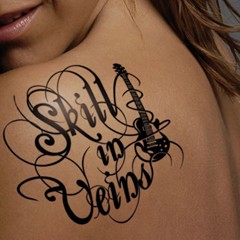 Review:
Either Gabriele Gozzi is one of the most sought after vocalists in rock these days or he is a complete whore. From the now defunct Killer Klown, to the pop-rock Markonee and several others, onto his latest project Skill In Veins, Gozzi has quickly become one of the premiere voices in the growing Italian rock scene. While he may be the voice behind the band, Skill In Veins is the brainchild of young guitarist/songwriter Andrea Lanza — the man who not only put this concoction together but shines and shreds throughout.

Originality may not be Skill In Veins‘ selling point, but who cares when the music is this satisfying? Finding a more consistent effort this year may be hard to do as this album never fails to perfectly recreate the sounds of Lynch Mob, Skid Row and other great hair metal bands. If you want blistering melodic rock you have it on “Can’t Ride My Soul”, “You’re Doing It Again” and “We Don’t Cry”. If you want something heavier try “Skulls On The Way”, “Youth Times” and “Sick Mind”. Maybe you’re in the mood for a ballad or two — no problem, Skill In Veins perfectly deliver those on “I’m Living My Life” and “Don’t Need You To Cry”, the later could comfortably fit on any Lynch Mob album. If that’s not enough, how about the whiskey soaked blues based “Just One Drink”, complete with a killer slide guitar.

Gozzi and Lanza both sound incredible on this self-titled debut, but when you add a rhythm section that has played with such artists as Udo Dirkschneider, Glenn Hughes, Ian Paice and countless others, not to mention a world class producer, you know you’re in for a treat. Skill In Veins delivers the goods — not only are they fun and talented, but their music is catchy and memorable as well. This band could very well be Outloud of 2010 — an unknown group that comes out of nowhere to be one of the year’s bests.