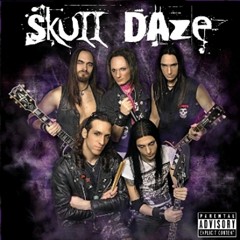 Review:
Judging by the artwork on Skull Daze‘s debut full-length release a few of the members blow their paychecks on make-up and hair gel. While the photo of the band on their self-titled CD may conjure up sounds of pop-rock bands like Poison or Reckless Love, nothing could be further from the truth. These Italian rockers are much heavier than your typical glammed-up rockers, falling somewhere between Crashdiet and the Killer Dwarfs.

For being such a young band — forming in 2007 — these guys have a great grasp of what made the sleazy underground so interesting in the late ’80s. They aren’t afraid to incorporate solos whenever they can, scream every chance they get and mix the old with the new. Even though Skull Daze aren’t reinventing the wheel, comparisons to other bands are difficult to pinpoint — the vocals alone bounce between the darkness of W.A.S.P. to the lunacy of the Killer Dwarfs and the banshee screams of Spread Eagle. The music follows the same trend — I keep thinking I’ve heard this all before, but have trouble figuring out where.

The best tracks on Skull Daze are “Back To Hell”, “Nothin'”, “Believe”, “Nowhere To Run” and “Sex Drugs And Rock N Roll”. Each of these songs all have a sameness about them though, which could get old on future releases. However the best of the bunch in my opinion is “Dirty Girl”, a fast-paced rocker with the best chorus on the CD. One interesting thing about Skull Daze is that there isn’t a single bad track, the entire record delivers with a consistency rarely found these days.

For a debut effort Skull Daze have done a great job. They may not be the most original, but like a band such as Sledgehammer Ledge they have taken a proven formula, twisted it around a bit and ended up with a blistering album.