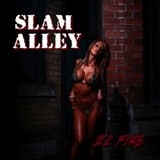 Review:
Slam Alley had two things going against them when they stumbled upon the hard rock scene. The first was hellaciously bad timing, and the second was that they sounded identical to Skid Row (not such a bad thing)!

One often feels sorry for the countless forgotten bands that saw their dreams crushed with the emergence of grunge. However Slam Alley is a little different, not only was grunge on the scene when they recorded these five songs… it was completely dominant. The band had a better chance of having Pamela Anderson ringing them for a date back in 1995 than they did getting a call from any legitimate record company. Talk about a bad case of being in the wrong place at the wrong time.

Slam Alley‘s second fault is their sound, which is completely derivative of Skid Row. Although they don’t sound like a second rate Skid Row — like Dirty Rhythm before them, it simply means that the band didn’t have enough originality to generate much interest back in the day. Listening to 21 Fire now though makes you wish Skid Row themselves were writing music this energetic back in 1995. While Sebastian Bach and company were altering their sound on Subhuman Race, Slam Alley were writing tunes that in a perfect world would have made for the follow-up to Slave To The Grind. The first three tracks in particular are scorchers as vocalist Christian Dorris wails with a furry that would have made Bach himself envious. In hindsight, where was this guy when Skid Row were looking for a new frontman? He would have fit the band so tight it would have made O.J. Simpson‘s ‘glove’ look like an oversized winter mitt.

In some sort of parallel universe Slam Alley would have been huge… maybe. While there is no denying these guys can rock, the final song on 21 Fire is a ballad that absolutely pales in comparison to something like “18 & Life”. I still can’t believe these guys tried to pull this sound off in the mid-90s… I’m not sure if I should shake my head in disgust or commend them for their dedication. Either way, out of all the lost and forgotten hair bands of the early 90s Slam Alley are one of the better ones.