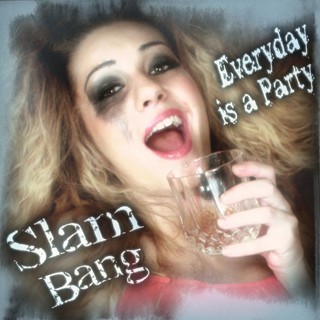 Review:
If the BulletBoys, Metallica, and the Beastie Boys gave birth to a band, Illinois natives Slam Bang would be their love child.

I like it when bands put their best track first and Slam Bang have done just that on Everyday Is A Party. “Naked And Stoned” is everything this band does well — it is high on energy, heavy on guitars, and very tongue-and-cheek. “Everyday Is A Party” is about day drinking, drugs and women, but this is not the most literal track on the seven song album, that award goes to “Hit It” with the lyrics “I’m gonna hit it, I don’t even know her name, I’m gonna hit, I don’t even feel no shame.”

Throughout the first six tracks, Slam Bang sticks to their formula of black-out drunken stories, simple riffs, and Mahoney-from-Police Academy type humor. One surprise is the ballad “She’s Calling Out Your Name” which is suspiciously the last track. After six songs focused on sex, drugs, and more sex I’m still not sure what to do with this closing song.

For fans of hard rock party anthems, Everyday Is A Party is a record to download (seeing as it is a digital only release). Play it at the beach while drinking a can of Old Style, inside your bright orange Corvette, or when “hanging” in the basement with your bros. Seeing as this is the final release with frontman Jeff Swan, who moved to California, it will be interesting to see how Slam Bang move forward with a revamped line-up.