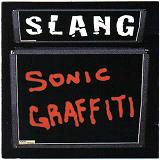 Review:
This little known gem comes out of Canada, and it was released in 2001. You’ll find yourself singing along to the majority of the songs presented on Sonic Graffiti.

Slang was formed in 1996, their vision was to form a band that had a hard rock crunch while at the same time keeping with melodic hooks. What you get with Slang is a modern sounding rock band with a classic rock flair. The guitars are crisp and the vocals spot on. Back in the day these guys opened up for a who’s who of Canadian rock including Helix, Honeymoon Suite and The Headstones to name a few.

The lead-off track “United” reminds me of Kiss and has a great opening. “It Ain’t EZ Being Sleazy” is an instant classic that sets the tone for the whole CD. The band also knows how to slow it down with the ballad “Gypsy Blues”. Another favorite of mine from the CD is “In Your Face”, it has a great beginning riff that has you instantly hooked on the song.

All in all, for lovers of Canadian indie bands this one is a must to have in your collection. Slang last performed live in 2005 and has been inactive ever since, that’s not to say that the band members have left the music industry, they are all currently keeping busy with other bands. Let’s hope that at some point the Slang crew gets back together to spin some more Canadian rock magic.