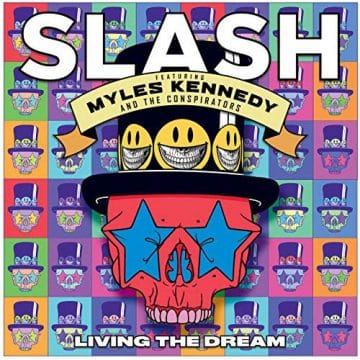 Review:
For those that have read my recent review of Slash featuring Myles Kennedy and The Conspirators at Casino Rama, you can attest to the fact that this was the very place I made the purchase of the band’s latest work. I bought both the CD and the ever so beautiful double vinyl. The way I see it is this… The CD is a throw away that I can play the hell of in the car. It’s the impersonal copy. Now as for the vinyl, it is like a picture of beauty dressed in black that holds the key to unlocking the inner workings of any pristine recording. The CD is easy to transport; the vinyl, not so much. It can’t be thrown around the car. It’s not easy to play due to the fact that most vehicles do not have a turntable. Every vinyl must be cleaned before listening. It must be held carefully in your hands as you place the needle ever so gently on the black platter. When listening is complete, it must be but back in the sleeve ever so gently. The cover itself must have a protective slip cover as to not damage the amazing artwork in any way. Now you can go even one step further if you’re really anal like me, you replace the inner sleeve with a plain white one to not damage the inner sleeve in any way. If the album is a gate-fold, it is easy to place the inner sleeve within the center of the packaging. As you can tell, I take my vinyl very seriously. Why wouldn’t I? This is the closet form to the actual recording. It’s warm, it’s personal and really showcases the music in the form it was intended.

For years I have made the comparison of CD to vinyl. It goes as follows. Listening to a CD is like having sex with a hooker. It is impersonal and cold. Wham, bam, thank you mam. As for vinyl, it is like making love to a beautiful woman. As many times as you do it, it’s still amazing. It’s warm, it’s personal and gratifying. So there you have it kids, that’s my analogy for the day. There will be a test to see if you were paying attention at the end of the review. Oh, I may have missed a listening format. The ever dreaded download! If a CD is like a hooker, then what is a download? I’m not even going there. You’re smart. You figure it out.

Now let’s get back on topic here. What can I say about Living The Dream? Honestly it’s nothing short of amazing. On my drive from Rama, Ontario, Canada to Oshawa, I played the album the whole way on my journey home in the darkness of the night. In the words of Jacob Dylan — “We can drive it home with one headlight!” That is the God‘s honest truth too! Anyways, I guess possibly that would be almost two listens through. This was the CD of course. I would not get to the vinyl copy until two days later. This would be the Saturday of Canadian Thanksgiving weekend. Yes that’s right my American friends, ours is long before yours. On this weekend, I would be spending quality time with my wife’s family. To be honest, my mother-in-law makes the greatest turkey dinner on the planet. This year, she would be cooking for 16 people. Included in this 16 was my good friend and former Slik Toxik guitarist Kevin Gale. For those that don’t know, Kevin and I are currently enthralled in writing his much anticipated autobiography, but on this weekend, we would be taking some time off to spend with family. That is right, after Kevin and I have been working together, we are like brothers, so he is considered “family’.

Regardless, I met Kevin at my place around 3 pm. He had taken a long two hour drive in traffic and he was very ready to rip someone’s head off as he had driven through Toronto on a long weekend. When he arrived, I had just put on Slash & company’s latest work. I actually started off with side 3 of the vinyl. As Kevin arrived, I gave him a quick tour of my basement. He was astounded at my CD and vinyl collection. We conversed as the single “Driving Rain” came on. We quickly discussed the fact that bassist Todd Kerns was all over the vocals. We even made mention of the fact that the chorus was very reminiscent of Kerns‘ former band Age of Electric. Possibly, he had a very big piece in writing that song. As the track “The Great Pretender” came on, Kevin was quick to point out the Gary Moore influence. I could not have agreed more. Slash possibly was taking that influence and incorporating it within the intro guitar solo and all that followed. It was simply different for Slash, but really added a nice depth to an already magnificent piece of work.

Kevin and I quickly decided it was time to hit the ever so popular LCBO to get some delicious beverages for the evening. As we drove to the LCBO, we listened to the album from the beginning. Kevin and I discussed the parts of the songs that stood out to us. As we left the LCBO, we cranked the hell out of the album. We listened intently. Kevin quickly made the comment that he loved every song so far. By the time we had almost hit our destination for dinner we had probably had one listen through the whole album. Now, we had originally had a thought of listening to another album on the way to dinner, one Slik Toxik Doin’ The Nasty, as it seemed like a good time to discuss some material for our upcoming book, but due to the fact that I have broken CD player in my car, I could not eject Slash. It wasn’t until we briefly stopped to grab some mix at the local convenience store that I was able to concentrate on taking my son’s Ontario Health Card, pushing it into the disc player on the top of the CD and persuading the CD out. That CD player has endured a lot of hours of music. At least 200,000 kms of use over the years, so it’s a miracle it even still works.

With all that, what more can be said about Living The Dream? As it currently stands, Slash featuring Myles Kennedy and The Conspirators currently holds the position of best album and best concert of 2018 for me. The Dead Daisies will be a close second in both departments. All I can say about this album is that if you’re looking for epic songs in the vein of Guns N’ Roses, you may want to go elsewhere. Slash has developed a band sound all its own. Every song hits you right between the legs (ouch). In some ways, I hear more in the way of a ’70s guitar theme. I find the rhythm guitar to be very less distorted which actually gives the album a more mature sound. That could be partially the fact that this is Frank Sidoris‘ first recording with the band. It’s not that in your face tone that Slash once used on tracks “Nightrain” and “Don’t Damn Me.” The guitar texture seems much more calculated. I highly recommend this album to anyone looking for a great hard rock record. If you asked me for a comparison, I really couldn’t give one because this album truly holds its own. Very well down gentlemen. Now radio… please start playing the hell out of Living The Dream. I’m sick of that other band that sounds like Zeppelin!!! Attention shoppers — this is not a rip off!!!

The official music video for “Driving Rain” from Slash ft. Myles Kennedy & The Conspirators. Get Living The Dream now! https://RoadrunnerRecords.lnk.to/livin…

Slash featuring Myles Kennedy and The Conspirators‘ “The Call Of The Wild” song: