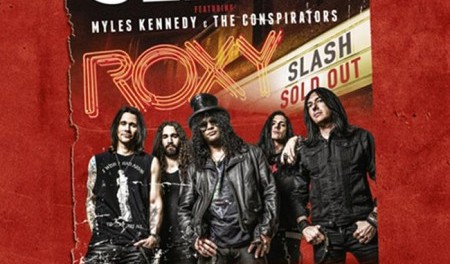 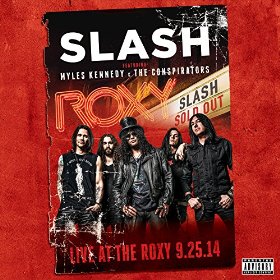 Review:
At first, I was going to question whether we really needed a new live album from Slash featuring Myles Kennedy & The Conspirators since it seemed like just yesterday since the group (minus The Conspirators part of its name) released the live album Made In Stoke 24/7/11. However, since it has already been almost four years since Slash and company released a live album and the group has released two studio albums in the interim, Live At The Roxy 9.25.14 is a welcomed new release! Even if Slash featuring Myles Kennedy & The Conspirators — what a mouthful that long band name is — had released Live At The Roxy 9.25.14 with only the studio album World On Fire in between the release of the band’s last live album, I have to say that I would still welcome it because Slash‘s live albums with lead vocalist Myles Kennedy in tow simply kick ass!

If you haven’t had a chance to see Slash featuring Myles Kennedy & The Conspirators play live, do yourself a favour and catch a show if you can. The next best thing is to pick up one of the band’s live albums — there are already three if you include 2010’s double live album Live In Manchester, which apparently was quite the limited edition with only 1,200 copies available for sale. Live At The Roxy 9.25.14 demonstrates a band at the top of their craft. Kennedy handles the Guns N’ Roses songs with ease while putting his own stamp on them. Slash‘s signature guitar sound is there and sounds great even through the over 17 minute long “Rocket Queen” with its extended guitar solo. The rest of the band sound tight and Todd Kerns could likely handle the lead vocals for quite a few bands — check out his awesome singing on “Doctor Alibi.”

There are a decent number of Guns N’ Roses classics to hear with six of them including five from the amazing Appetite For Destruction. Throw in one Velvet Revolver song (“Slither”) and the rest are pulled from Slash and company’s three studio albums, Slash (three tracks), Apocalyptic Love (four tracks) and World On Fire (five tracks). Although I was not crazy about Slash featuring Myles Kennedy & The Conspirators‘ last studio album World On Fire as I found that the songs ended up sounding the same after a while, the good news is that the band elected to play pretty much and arguably the best five songs from that record live including “30 Years To Life” and “Bent To Fly”. The two best tracks on Slash are also featured on Live At The Roxy 9.25.14 with “Ghost” and “Doctor Alibi.” In essence, all of the songs that I would have expected Slash to play are on Live At The Roxy 9.25.14 except likely my favorite Guns N’ Roses song “Mr. Brownstone.” I do acknowledge that Live At The Roxy 9.25.14 also came out on DVD but I only purchased the CD version of it so my review is limited to that.

In short, Slash has more than proved that there is musical life outside of Guns N’ Roses and the tall hat axeman is still able to deliver a great live show with the help of an excellent supporting cast in Kennedy and The Conspirators. Live At The Roxy 9.25.14 should be a no brainer to add to your collection.