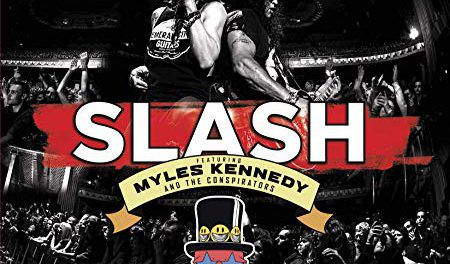 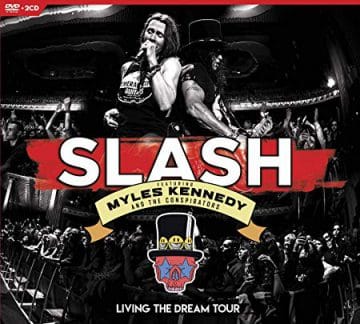 Review:
Another tour from Slash featuring Myles Kennedy and The Conspirators brings a new live album and DVD. Like the previous packages, Living The Dream Tour is another brilliantly shot and executed performance. The new package was recorded live at the world renowned Hammersmith Apollo in London, England. For those that don’t know, the band is made up of main man Slash on lead guitars, Myles Kennedy on vocals, Todd Kerns on bass, Brent Fitz on drums and Frank Sidoris on rhythm guitar.

Living The Dream Tour opens with “The Call of The Wild” and it is followed by “Halo.” Noteworthy tunes include, “Ghost,” “Back From Cali,” “Standing In The Sun,” “Nightrain” which is the only Guns N’ Roses offering in the set, the hit “Driving Rain,” “Anastasia,” “We’re All Gonna Die,” “By The Sword,” “World On Fire” and “Wicked Stone.” The most valuable player (“MVP”) of the band is Myles Kennedy, who has showcased his versatility during his tenure in the group and this live document is evidence of this.

Slash featuring Myles Kennedy and The Conspirators have a chemistry that only comes when you genuinely have fun with the people who you share the stage with. If Guns N’ Roses were to go on hiatus tomorrow, Slash could do this and still get out and perform, create and keep his name out there. With his band gaining more momentum with each subsequent release, people can finally put the talk of a Velvet Revolver reboot to rest already. With Kennedy at the helm, you can thrown originals in the set along with Guns N’ Roses and Velvet Revolver cuts and you’ll get the best of all worlds.

In short, if you’re a fan of Slash featuring Myles Kennedy and The Conspirators, there’s no reason why you wouldn’t want to own this. It’s got hits, deep cuts and the focus is now on this band, rather than splitting the set with Guns N’ Roses’ catalog of hits. The CD/DVD and CD/Blu Ray also features bonus footage which takes fans behind the scenes of the making of Living The Dream Tour.