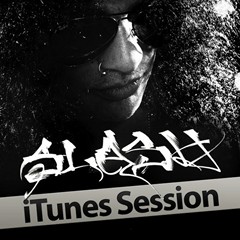 Review:
Recorded exclusively for the iTunes, Slash and Myles Kennedy join forces once again on the EP iTunes Session. Two songs from Slash‘s latest solo album are featured as well as a bit of Guns N’ Roses, Velvet Revolver and Led Zeppelin.

With “Back From Cali” and the rather lovely “Starlight” from the solo album, you can hear the connection and chemistry between Slash and Kennedy — and as always, the distinctively characteristic guitar work that is the Slash sound is even more evident than ever on this EP.

One has to have an open mind when it comes to people covering the Guns N’ Roses classic “Rocket Queen”. So listening to this, with said open mind, and knowing full well that Myles Kennedy was not going to sound like Axl Rose and would put his own spin on it, I was still more disappointed than I was expecting. The one good thing about this rendition is that it’s an extended version with more of Slash‘s playing than in the original, but the voice of Kennedy just doesn’t work on this number. The duo then try their hand at Led Zeppelin‘s “Communication Breakdown”, and while a cool choice of song, especially for Slash, it has moments of sounding a bit screechy and again the vocals don’t work well.

But it’s definitely not all bad here and those were the only two songs I didn’t enjoy a lot. Myles nails the Velvet Revolver number “Sucker Train Blues” with lots of punchy attitude and, for my money, he sounds better than Scott Weiland did.

iTunes Session is not a vital purchase and I’m not sure I’d pay a fortune for it, but for under five bucks what the hell?

Buy The CD:
Purchase at iTunes.com