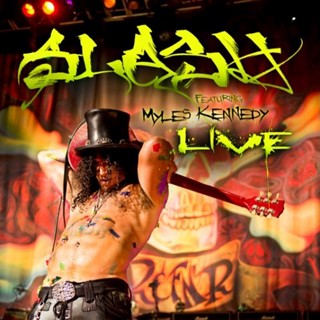 Review:
Slash states in the liner notes of his live album Made In Stoke 24/7/11 that he always wanted to play Stoke — the English town where he grew up. Slash‘s dream finally came true when he was lining up dates to promote his solo album simply entitled Slash.

The set featured on the live double CD or CD/DVD packages of Made In Stoke 24/7/11 is inflated when compared to the setlist the band usually performed on this tour. What’s the reason behind this? Simply that Slash wanted to pull out all the stops for this very special occasion. Along for the ride are singer Myles Kennedy, bassist Todd Kerns, drummer Brent Fitz and guitarist Bobby Schneck, and the band was tight — and the fact that they were filming and recording this particular performance gave the musicians and fearless leader Slash an extra boost. The group played a blistering, sleazy, gritty, and virtually flawless execution of Slash’s Snakepit, Guns N’ Roses, and Velvet Revolver classics as well as favorites from the current solo album. Slash plays with a swagger, urgency and reckless abandon not seen since the Appetite For Destruction tour — it’s clear that the infamous guitarist caught his second wind and is having a blast with his current bandmates.

Myles Kennedy, who was best known for his work in alternative rock band Alter Bridge before enlisting to work on Slash‘s solo album, gives Axl Rose in his prime a run for his money — vocally, stylistically and visually. Kennedy handles Slash‘s back catalog effortlessly and tackles the Guns N’ Roses repertoire with respect and class. It’s hard to imagine any other singer fronting this band, which is why Slash & Co. are currently locked up in the studio working on material for a new album.

Among the highlights from this 21 song assault are “Been There Lately”, “Nightrain”, “Ghost”, “Back From Cali”, “Civil War”, “Starlight”, and “Slither”. Essentially Made In Stoke 24/7/11 is a greatest hits live album that will tide over fans until the next studio album is released. Made In Stoke 24/7/11 will give those that overlooked Slash on tour this year a taste of what they missed.