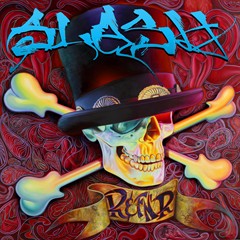 Review:
Slash once said he would play at the ‘opening of an envelope’ just because he loves playing so much. Even though Velvet Revolver seem to have been put on the indefinite back burner, Slash has always kept busy over the years, playing with a wide variety of artists and resulting in some surprising collaborations in the past. His self-titled solo album is no exception, and this CD really is a mixed bag.

Slash has some friends featured on his album that have voices I’ve always liked, and a few that I don’t. Even if you don’t like the groups they were in, or the music they created, not many people can deny that Ian Astbury, Chris Cornell and Andrew Stockdale have great sets of pipes and they don’t disappoint here. All three prove why they managed to achieve success with their respective bands in the past.

I’ll be the first to admit that I’m not the best to judge the Lemmy Kilmister number “Doctor Alibi” because I just don’t like his guys voice, and even Slash isn’t going to change that. But for those that call Lemmy God, you probably won’t be let down with this typical grunter sounding number from Motorhead‘s main man. Iggy Pop‘s voice is a love it or hate it thing, but he sounds the same as he did 20 years ago. With his smoky voice he carries “We’re All Gonna Die” — but damn, some of these lyrics are bad, bad, bad and just plain stupid… on the brink of being embarrassing even. “Let’s pee on the ground and jump around”?

The thing with using singers that are so diverse in their musical genres, is that it will take a pretty open minded person to enjoy it all. Slash features some guests I thought I would dismiss straight away, because from what I’ve heard from them before they just aren’t my bag. But Fergie for example proves she can belt it out — Adam Levine and Myles Kennedy don’t sound half bad either, but the songs themselves just don’t stand out. As for “Saint Is A Sinner Too”, featuring Rocco De Luca (who?), it is just a snore fest.

The pleasant surprise and unexpected curveball came during Kid Rock‘s “I Hold On”. Kid Rock sounds good and the number has nice lyrics and a cruisy feel. The instrumental “Watch This”, featuring Dave Grohl and Duff McKagan is another winner and more ‘R&FNR’. I just wish the whole album sounded more like this musically, with vocals thrown in.

As a self-confessed Slash ‘nutswinger’, as the saying goes, even I realize that he isn’t the greatest guitarist in the world, but he does have his own signature sound which he weaves throughout this album in his unmistakable emotive approach and with his usual lack of ego.

Slash is a hit and miss affair and won’t appeal to everyone because of the eclectic mix of vocalists and songs — not to mention the countless different editions available with differing bonus tracks. While it’s a grower, I’m a little disappointed that I dislike more tunes on Slash than I enjoy, but there might be enough of his distinctive playing style to keep the diehard Slash fan happy with this release.

Reviewed by Tania for Sleaze Roxx, May 2010