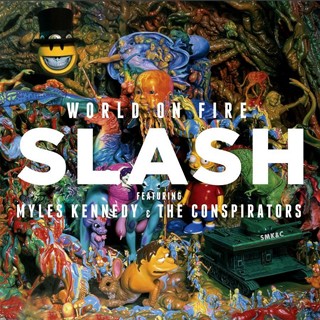 Review:
You’ve got to hand it to Slash, almost every project he associates himself with seems to have success at the mainstream level — be it with the iconic Guns N’ Roses, with some of his GN’R mates in Velvet Revolver, or now with Myles Kennedy & The Conspirators. For some reason, Slash is able to produce music that is not only appreciated by the ’80s hair metal fan base but also by the mainstream and younger rock and roll loving public.

World On Fire will most likely keep that trend going as Slash and company offer another dose of songs highlighted by the guitarist’s catchy riffs along with the distinctive and pleasant voice of Myles Kennedy — those two guys really complement each other well. Most of the songs on World On Fire are quite good without reinventing the wheel too much from Apocalyptic Love, the debut record from the line-up now known as Slash Featuring Myles Kennedy & The Conspirators. The CD starts off strong with three fast paced rockers, the title track, “Shadow Life” and the infectious “Automatic Overdrive”. My favorite on the album is the fiery “30 Years To Life”, but there is something to please everyone on World On Fire including the faster “ballad” “Bent To Fly”, with its catchy chorus.

The problem with World On Fire is that despite listening to it many times, I am still for the most part unable to distinguish between one song to the next. It seems that Slash and company decided to use the same blueprint for most of the tracks. Or perhaps it is simply Kennedy‘s voice that makes each song sound pretty similar. Whatever the case, because all the songs seem to blend in with each other, I can’t pick any standout track aside from “30 Years To Life”.

Unfortunately, the lessons about limiting a record to only the great stuff fell on deaf ears. Slash is at it again with World On Fire, this time offering seventeen songs. Not surprisingly, there are a few duds that could have easily been omitted, the biggest offender being the closing “The Unholy” — which is a dull, moody and slow plodder that should never have made the cut. The song does pick up during certain instances, but overall it is a sad way to end a rocking CD.

Although World On Fire has too many similar sounding songs, there are enough good and even great tracks included to appeal to any hard rock lover — and at the same time will likely garner some major radio airplay.