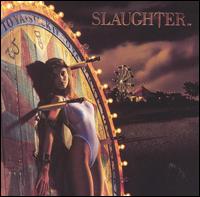 Review:
Stick It To Ya is the debut effort from the rocking quartet known as Slaughter. Songs such as “Eye To Eye”, “She Wants More”, “Mad About You” and of course the rocking hit “Up All Night” (#27) show that the band was able to keep up with the best of the glam metal crowd. There are also the hit ballads “Spend My Life” (#39), “Fly To The Angels” (#19) (two separate versions appear on this release) – a tribute to a former girlfriend of vocalist Mark Slaughter‘s – and the instrumental “Thinking Of June”.

Formed out of the ashes of the Vinnie Vincent Invasion, Slaughter would become even more famous than Vinnie Vincent by playing a good blend of pop/metal similar to that of Def Leppard. Sadly we lost guitarist Tim Kelly in an automobile accident in 1998, but the band continues to tour and make music to this very day. A glossy/poppy hard rock album, Stick It To Ya gets two thumbs up!