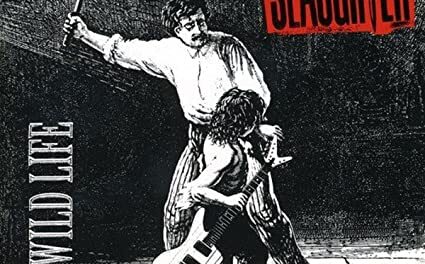 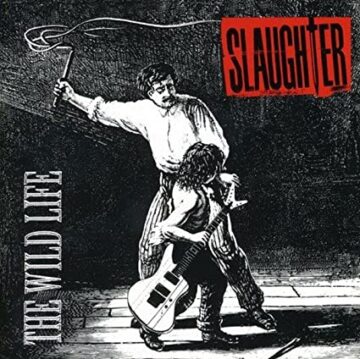 Review:
I rank Slaughter in the category of bands that should have had a long successful career, with the members being vastly underrated in terms of musicianship and talent. Yes, I know the band still plays on occasion, but the original line-up’s work was undervalued coming towards the end of the glam era. Their limited album releases are up there with White Lion for me in that with the little run they had, they had a solid body of work. After the great Slaughter debut, which I was so eager to get, and wore out on cassette (as I mentioned in reviewing it for this site in 2020), I was ready for the next studio album after (at first) missing the live EP from the band in 1990. The first album’s cover was a favorite of mine, and I was a little shocked seeing a cartoon on The Wild Life, but it wasn’t going to stop me from getting the cassette for hopefully more solid rock from the guys.

The album opens with “Reach For The Sky”, a solid, mid-tempo song, similar to the style of the band’s hit “Up All Night” from their debut, which has a creeping, crunching guitar groove with encouraging lyrics stating there is nothing the listener can’t do while getting through the daily struggles of life. Even though many of the band’s songs are rocking in nature, sometimes their positive lyrics gets overlooked, which was one of my favorite things about the band. Like the other albums by Slaughter, you find added production to the vocals, along with sound effects such as the use of newscast personality samples or helicopters, cars, or other sounds making the tracks seem like a mini-Hollywood style movie for added measure, which is the case here with some laser-like sounds in the song, and the opening bell tolls. The guitars from Dana Strum and Tim Kelly give the beginning a vibe like Aerosmith‘s “Sweet Emotion.”

“Out For Love” starts and ends with a car effect peeling out and tearing down the road, with the theme of the band coming to your local town ready to rock out and take over the night as the hosts of the party, looking for some women who want to join them in the venture. This is three and a half minutes of some intense, driving rhythm like the classic song “Radar Love.” Tim‘s shredding guitar solo is impressive on here as well and gives a second solid start to the album. The title track from the album’s chorus is a little weaker than the first two songs, where it seems rushed from the title into the next set of words. However, this is still a rocking song, with Mark Slaughter‘s mix of the high and lower range vocals. The song tries to be a new music anthem, and may not be as catchy as some of the band’s other singles, but it still works overall (besides the one line in the chorus), and is short enough for the radio-friendly crowd without lacking in power.

One of my favorite songs by the band, especially with their ballads, comes with “Days Gone By,” a song lyrically about looking back at a past friendship with fond memories. The song goes beyond the normal boy/girl relationship with its vagueness where it can be about just friends who weren’t romantically involved as well, which gives it a universal appeal. The album’s musical introduction here gives the strong rock power ballad, before going into the piano segment that is omitted on the single version of the song (and on their Best Of CD Mass Slaughter), which starts with just the piano. Mark has stated in past interviews that he thought this track should’ve been bigger, calling it the best song on the album, and I agree it should’ve been a song more people should hear. While “Fly To The Angels” was a great song from the debut album, this is my go-to for the band’s slower songs.

“Dance For Me Baby” is just a fun song with a late 1980s vibe to it, with strong cowbell and the ride cymbals by drummer Blas Elias, and lyrics that throwback to encouraging a good time. The song has a pop feel to it with the strong backing vocals on the chorus. The song has an early Mötley Crüe drum feel to it, but with less sleaze. The song is rather short, and a nice deep cut for fans like me who like a little pop flavor and melody to their hard rock.

The band channels an inner mystical Beatles era with the opening of “Times They Change” before the song goes into the more rock format and is the longest track on the album at over seven minutes long. Although it still is a rock track, there is quite a bit going on with the different drum sounds and layered vocals. Slaughter, for the casual fans, may have been considered as just a band coming at the end of the glam rock era, but they were vastly underrated in terms of musicianship, with Dana Strum not getting enough credit for his production talents (Slaughter too). Midway through the song, the song kicks into a melodic guitar fest where Kelly shines. Many songs over five minutes in length seem like they last an eternity, but the length of the song here doesn’t wear out the listener, which is to the band’s credit. Adding the newscaster samples (credited to Tom Brokaw, George Lewis, and the NBC Nightly News) towards the end adds a strong ending to the song. Brokaw and company may not think they’d ever appear on a hard rock album, but here they are talking about the bombing of Baghdad.

The band gets back to the feel-good party theme with “Move To The Music.” Celebrating the vibe of rock music and how it makes the band feel gets back to the standard format of the band. Another deep cut that needs to be heard. “Real Love,” the first single off the record starts with some great Kelly guitar fills in the introduction. This isn’t a standard power ballad and is more along the lines of “Is This Love” by Whitesnake, where the song still is strong with guitars with the romantic lyrics.

“Shake This Place” has a more blues guitar style to the song, as opposed to a straight-up rock feel. Another deep cut that should get more attention, giving the listener another fun listen after working all week and looking to let off some steam. This would be a great fit for the band’s live set. When I saw the band live shortly after the Fear No Evil and before the Revolution release in a club in Austintown, Ohio (the date escapes me), the band was full of energy and was solid throughout, and this would fit well with the setlist. The song just ends without any fade out or special effects, as opposed to some other songs. This should be added to hard rock fans’ playlists even today and holds up nicely.

“Streets of Broken Hearts” has layered vocals that gave me an Enuff Z’nuff vibe in the beginning. An almost acoustic mix song that gives the 1960s/1970s AM radio pop flavor to it. The guitar work is nice throughout and is a song one could jam to on a summer day, where even though the lyrics are about a love gone wrong, it still has a happy musical structure to it, which is reminiscent of my all-time favorite band, The Beach Boys, who added a mix of happiness to songs that didn’t seem so happy when reading the lyrics. The album picks up with “Hold On.” One thing I loved about the band is how solid drummer Blas Elias was throughout the albums. Yes, he did his fancy stick twirls and cymbal catches like many of the late 1980s and 1990s drummers were known for, but he doesn’t get the credit he should when solid drummers are mentioned from the era. He keeps the beats going, and adds just enough at times that it isn’t distracting. The drumming is what I like about this track, although the overall song is not as great as some of the others.

“Do You Know” starts with a guy laughing, and goes into a slow groove. Strum‘s bass work is what I like about the song the most. After eleven songs already on the album, one could get tired by the end of the record, but this song gets the flow of the record continuing without feeling too long. This is the second-longest song, at almost six and a half minutes long. “Old Man” is an old-school blues/country song with harmonica playing throughout. Although it takes the album in another direction musically, it is my least favorite track on the record but gets better towards the end, so I don’t have to hit the skip button to state it’s a total miss; it just has never been one that attracted me.

The final track is an instrumental version of “Days Gone By, ” unless we are talking about the remastered album, which has two bonus songs (which I am not reviewing since I am only covering the original CD). Just like the previous track, this is nice being placed at the end because I can stop the album at track 12, without feeling like there’s more to the album. I don’t need a different version of a song where I already like the original, and I’m a fan of songs with vocals, so although the song has artistic value to it, it isn’t something I normally will listen to.

There are several things I remember when first getting this release. First, was how the album was dedicated to KISS drummer Eric Carr (who helped the band out in their history early on) and Queen singer Freddie Mercury, who both passed away the same week. The second is buying the band’s VHS home video release promoting this, where today, takes me back to the time of mall record stores, and loving getting the home video releases of some of my favorite bands watching it over and over again, without having to wait for MTV or other video shows to play them (I love mentioning past experiences in my reviews).

After coming off the successful debut and a live album to keep fans satisfied until the second release, The Wild Life holds up nicely today. Even though I didn’t listen to this sophomore studio release as much as the solid debut record, I find that listening to it years later, the album has many deep cuts that should have been bigger hits. Chart wise, the album was in the Top 10 on the album charts here in the U.S., and the singles only hit The Mainstream Rock Charts, coming shy of the Top 40 like “Fly To The Angels” did two years earlier. Many reasons could be attributed to the lack of success of the record; from two solid years in between works, the climate change in the listening audience, or the label shutting down soon after the release (Chrysalis was being sold off to EMI by this time, ending their successful runs with acts like Huey Lewis & The News and Pat Benatar). There are solid deep cuts and hidden gems on here, and with over an hour of music, this album should’ve gotten more love.