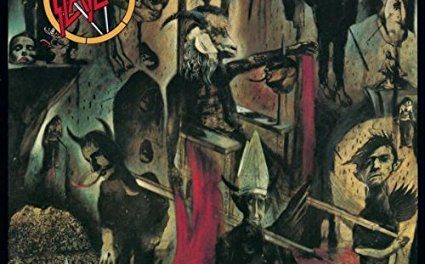 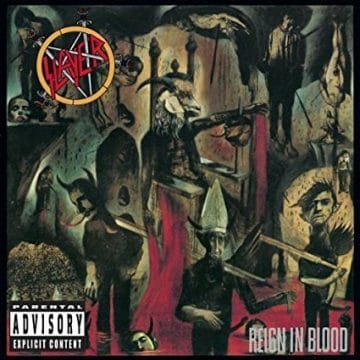 Review:
Slayer — just the name itself evokes so many emotions, usually that of fanatical hysteria, rabid fan support & unrestrained (unhinged?) devotion. Reign In Blood the album? Once again, all the same reactions.

When released upon the world in 1986, Reign In Blood set the metal world on fire, both with its intensity and genre defining sound and speed. Not that it was faster than some of their counterparts (although some would argue the point) but it just seemed the stars aligned in perfect metallic harmony, to create an album that melded the aforementioned speed, power and sheer evilness of the time. I say this because you have to admit that when you either saw the cover or listened to the music for the first time, you KNOW this scared the crap out of you and when this was released on the unsuspecting metal fan base at that time, it was all new territory, to say the least. Along with Venom, Sodom and Destruction, it was an exciting moment in the metal world!

I realize that here at Sleaze Roxx, this album may not be in on your rotation, or just a little too extreme for some but it’s safe to say, many have heard this and count it as a classic in their mind. Reign In Blood does not require much need to get into details has to the how’s and why’s that make this album the gold standard in every metal fan’s life. We all likely have our own stories and moments of what we thought, felt and experienced when we listened to this album for the first time. That amazing cover art, the double bass drum speed of Dave Lombardo at the end of “Angel Of Death”, the frantic and chaotic (but oh so sweet) riffing and lead guitar work of Kerry King and Jeff Hanneman (R.I.P.) and the throat from the depths itself of Tom Araya. For an album that lasted less than 30 minutes, it’s hard to go into a long winding tirade or even an in-depth synopsis that could and would last much longer than that, or even anything that would even change your mind or cause further discussion (arguments) to the hows and why and what nots.

I read somewhere that 30 years later, this album is still as relevant as ever. Some things are a certainty in life with death and taxes being a few. Slayer‘s Reign In Blood being one of the all-time greatest releases in the world of (metal) music — that is a certainty you can count on and that we can all agree to.

Reviewed by Will “Bones” Lee for Sleaze Roxx, October 2016