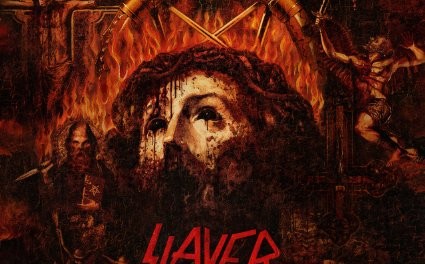 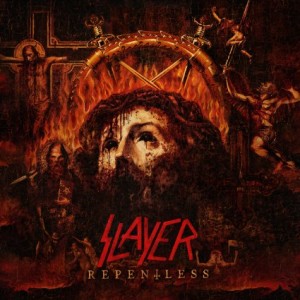 Review:
I know the appearance of a Slayer review on Sleaze Roxx will likely raise some eyebrows. However, there are Sleaze Roxx readers that listen to music that is slightly on the heavier side of things. Slayer like the other three of the Big 4 have their fair share of rockers that enjoy their music.

So for those that haven’t been keeping track, Repentless is Slayer’s 11th studio effort. In addition to Repentless marking the return of Slayer, it’s also the first album without Jeff Hanneman who passed away in 2013. Exodus’ Gary Holt is sitting in for Hanneman and by all accounts is “in” the band. Returning to the fold and taking over for the departed Dave Lombardo is Paul Bostaph who had previously played with the band.

With Repentless, Slayer have a lot to prove. Can they “do it” without any involvement from Rick Rubin? Can they “do it” without one of their key songwriters? Will the fans support half of Slayer now that Hanneman and Lombardo are not in the band? That’s a lot of pressure but the end result is an album that sounds like Slayer both lyrically and sonically. Kerry King handled all rhythm guitar tracks and splits solos with Holt while the songwriting was handled by King and Araya. Slayer don’t overthink things and don’t stray too far from the formula that made them what they are. Much like AC/DC and Motorhead before them, you know what you’re getting when you pick up one of their albums; razor sharp buzzsaw riffage, over the top guitar solos, a percussive bombardment sure to raise the dead and a barking vocal that will get your undivided attention. The production was handled by Terry Date who’s done some phenomenal work with bands on the heavier side such as Overkill, Pantera, Prong, Metal Church, White Zombie, etc. Production wise, this isn’t some of his better work –in particular, the drum sound leaves to be desired, which is a shame as Bostaph played incredibly well on Repentless. I put this album up there sonically with Pantera’s Great Southern Trend Kill. It’s not that good on the ears.

To put Repentless into perspective; it by no means matches the glory days of Reign In Blood, South Of Heaven or Seasons In The Abyss. It does however go toe to toe with Slayer’s recent work of God Hates Us All, Christ Illusion and World Painted Blood. The standout tracks are “Repentless,” “When The Stillness Comes,” Chasing Death,” “Piano Wire,” and “Atrocity Vendor.” If I had a gun to my head and was asked to place Repentless in order with the three aforementioned records from least favorite to favorite; I’d place this after God Hates Us All, followed by Christ Illusion and then World Painted Blood.