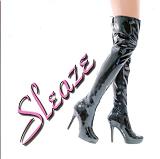 Review:
This Danish band must be after my own heart by naming themselves Sleaze. By doing so however they are setting themselves up, it is the equivalent of an evangelist naming themselves Christ – if you do something like that and want to be taken seriously you better be damn good.

So, is Sleaze as good as their name would suggest? Not really, but they aren’t a disgrace to it either. I’m not saying that the band is bad, just that a group with this monogram should be off the charts, and Sleaze isn’t there – yet. Tommy Sleaze has the mandatory rough-around-the-edges voice and the band likes to play Motley Crue and Sea Hags inspired music resulting in “Black Neon Lights” and “Baby Don’t Be Sorry” (which has an intro yanked directly from the Crue) being impressive examples of moody sleaze music. But the band doesn’t really speed things up until “Hell On Wheels”. If the band kept up that tempo more often they’d really be onto something.

The more I listen to Sleaze the more I like them. They may not be deserving of the ‘sleaze’ name yet, but they have the potential to. For a band that has been together less then a year they are on the right track. They have the attitude, the raw sound and the musicianship – now they just have to take their songwriting a step further. Not even the legendary Sea Hags nailed things on the first try!

Ya know, as I keep spinning this disc I’m starting to realize that the only reason I’m not giving them a glowing review is because of the moniker they decided to use. So forget the name, and check these guys out.