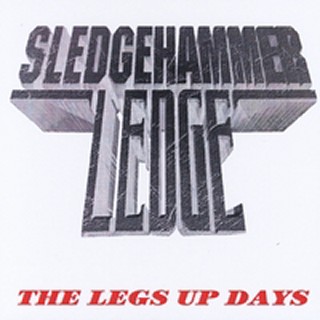 Production:
Produced by Sledgehammer Ledge/Legs Up. Mastered by Mark Klein.

Review:
I’m always amazed, although I really shouldn’t be anymore, at the seemingly endless amount of killer music that was recorded during the heavy metal heyday of the ’80s that was either ignored or buried for decades. The latest of these long lost gems to resurface is Legs Up, an Ohio band that renamed themselves the more appropriate Sledgehammer Ledge upon their relocation to Los Angeles.

While several groups from that era were completely inoffensive, playing party rock anthems in an effort to nail every willing female they could get their hands on, Legs Up were perfecting a heavier and more sinister brand of metal (although probably trying to get their fair share of women at the same time). The vocal delivery of Chris Childs, not unlike the guttural growl of W.A.S.P.‘s Blackie Lawless, really wouldn’t have worked attempting something like “Talk Dirty To Me” — instead he barks and screams with reckless abandon, sounding as if his vocal chords will explode at any moment.

While Sledgehammer Ledge would evolve into full-blown W.A.S.P. wannabes, Legs Up explored their sleazier side — although the two bands really aren’t that far removed from each other. If you want to experience what Legs Up is all about look no further than “Take Me To The City”, a screaming sleaze-fest of epic proportions — with an attitude like this I’m not sure if any city would greet the band with open arms. From there the onslaught continues with the crunchy sound of “Love Or Money”, the rumbling “Shootin’ Up The Town”, the unrelenting “Liar”, the over-the-top “Like A Bomb – Bang, Bang” and the sinister “What I Want”. Without a doubt, if they were able to get even a sniff of recognition back in the day, Sledgehammer Ledge would have had the PMRC wives scurrying for cover under their satin sheets.

While the sound quality of The Legs Up Days leaves something to be desired, this is a collection that is long overdue. Sledgehammer Ledge, and thus Legs Up, have always been a personal favorite of mine because they are entirely too mean, nasty and cantankerous to ever have broken into the mainstream. While bands like Poison and Warrant were selling millions of albums, Sledgehammer Ledge were occupying the dirty back alleys of the sleazy underground (“Wrong Side Of Town” even pays homage to this dark side) — probably covered in piss and vomit.