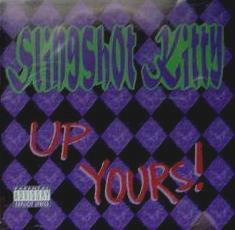 SLINGSHOT KITTY
UP YOURS!
Released 1996 (Perris)

Review:
Up Yours! is the debut effort from the Texas quintet known as Slingshot Kitty. The sound on the album, and killer rock tracks such as “Gunnin’ For You”, “In N’Out”, “Hey Hey” and “All Of The Night”, sound like a cross between Poison and Pretty Boy Floyd.

Even during glam rock’s heyday, Texas wasn’t the first place you would expect a band like this to appear from, let alone in 1996! Sadly Slingshot Kitty‘s brand of glam sleaze rock was quickly forgotten. The band is now broken up, but this release still deserves two thumbs up!