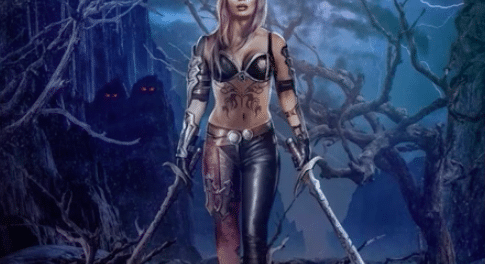 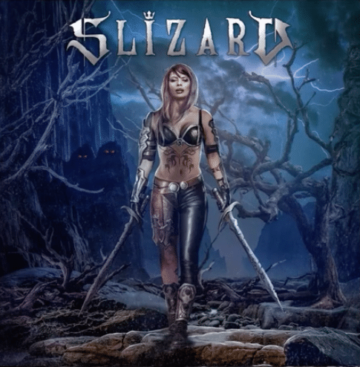 Review:
I had absolutely no idea what to expect when pressing play on the debut album from Los Angeles based metallers Slizard, except that they featured the “distinctive” and much lauded vocals of Liz Fawcett and a lot of songs that referenced things that do more than go bump in the night. Suffice to say, I was more than a little skeptical of what was to come.

That skepticism was immediately dispelled by the unexpectedly catchy and radio ready opener “Monsters” instantly showcasing Liz Fawcett’s dramatic vocal style and the excellent guitar of Pat “Buzz” Belrose. The driving, slightly sinister “Mr Hyde”, the roadkill themed “Caught Up In The Gears” and the pretty self-explanatory “Crack The Whip” continue the very rich vein of infectious rocking drama before the pounding drums of Todd “Toad” Resman dominates the anthemic “Skinwalkers” perfectly.

The swirling, epic “Watch & Listen” was once again beautifully played and sung but dragged a little for me after the previous five gems, but the hugely fun and tongue-in-Cheek “Vampire Zombies” and the rollicking “Running Towards The Zombies” completely redress the balance and could and should be added to any forthcoming movie in that genre. “Madness of The Queen” is a strange, weirdly affecting tale with another  perfectly pitched vocal performance from Fawcett that leads into the stomping “Neverland.”

“Down By The River” followed and is a little leaden by comparison, but the ghostly atmospheric “Spooks In The Trees” hooks you straight back in again. The seductively gothic beauty of both “Broken Dreams” and the achingly pretty “Will You Still Be There “ further illustrate the broad range of this band, before ending the album with “Slow Motion Suicide” which is probably the finest song on an album that has a whole collection of them.

This just shows how wrong your preconceptions can be. Yes, some of the subject matter is a little silly and there are a couple of tracks that I would have left off the album in order for it to be slightly more free-flowing, but it is crisply produced, Belrose and Resman are solid and quite often brilliant throughout, and Liz Fawcett is indeed a stirring revelation as a singer  and pretty flawless on the whole album.

The style and quality are completely evident and if this had been released by, say, The Pretty Reckless, then it would probably sell by the truckload and that just shows how unfair life can be because this deserves to do just that on its own merit. A massively pleasant surprise.

Slizard‘s “Will You Still Be There” video: