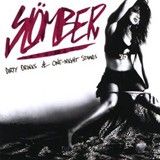 Review:
Sex, drugs and rock ‘n’ roll has always been a recipe for success in the world of hard rock, and Slomber is the latest band to embrace the motto. A quick look at the suggestive album artwork, then glancing over the track listing and finally reading the lyrics, one can quickly tell that these Norwegian natives aren’t exactly thinking with the ‘head’ on their shoulders.

Without even listening to the music on Dirty Drinks & One-Night Stands I got the feeling that this would be right up my alley. Once I did spin the CD it took a few listens for things to fully sink in. This five-piece, with some of the funniest and most ridiculous names this side of Sweet F.A., play honest music — not so much from the gut, but straight from the crotch.

Slomber‘s sleaze rock with punk influences makes for an energetic album, even if it is a bit difficult to get through at times. When the group do hit their stride, as shown on “Corvette Widow”, “XXX.Cum”, “All Sexed Up” and “Mistress Malone”, they play with an intensity that only a hungry young band could muster up. The guitar tandem of Randy Roxxx and Vinnie Trashcan sound far more seasoned on these three tracks than their age would suggest, proving that they aren’t afraid to mix things up and take a few chances. At their best Slomber feel like Hanoi Rocks kicked into sex obsessed hyper-overdrive, similar in style to another upstart named Panzer Princess.

This type of music can be taken too far however, as shown by the lyrical insanity of “Slut The F**k Up”. I immediately started to wonder if the drugs these boys were ingesting was the blue pill known as Viagra, and that they had overdosed. The song as a whole is laughable really, and I’m sure the guys will just shake their heads at the thought of it when they hit middle age. Of course Slomber aren’t trying to be Bob Geldoff on Dirty Drinks & One-Night Stands, so when things get out of hand it doesn’t come unexpectedly. The other thing I find annoying is the lack of bottom-end in the recordings. The drums don’t pack much of a punch and the bass itself is practically non-existent — a more capable producer would serve Slomber well.

Slomber may not be the most original, or even close to the best, sleaze band in the land at the moment, but their raunchy DIY work ethic fits the genre perfectly. You also have to love the band’s attitude, as the CD’s liner notes state, ‘If your friends are broke, make them a copy of this record and go get a beer.’ Who can argue with logic like that?