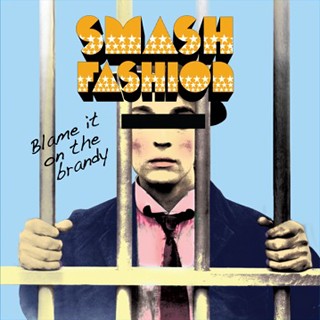 “Blame It On The Brandy” and “Marionette”, featured here as a 7″ single, both hail from ’60s pop sensibility and follow the group’s previous full-lengths Gentleman’s Guide To Sophisticated Savagery and Don’t Pet The Sweaty Things. If you’ve been missing Marc Bolan‘s boogie, The Sweet‘s sizzle or The Sex Pistols,’ erm… swagger, then pine no longer my Cuban heeled friends because Smash Fashion are here to answer your prayers. But hurry! This brand spanking new single is limited to only 300 copies (all are numbered you know) and is available at fine record shops in Los Angeles (not too far to walk then) and also available through CDBaby (phew!).

Available on vinyl only, with no digital download as of yet, it really sounds as if the internet hasn’t even been invented in Smash Fashion‘s world… get it while you can pop pickers and let’s send these handsome young men right to the top of the hit parade!