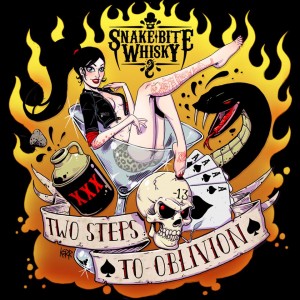 Review:
A cool name, a wicked album cover — Snake Bite Whisky seem to have all the marketing tools to succeed but are unfortunately missing the one key ingredient that is more important than anything else and that is top notch songs.

Snake Bite Whisky‘s debut EP Two Steps To Oblivion starts off with a cool riff but the band quickly loses me once lead vocalist Jay R starts “singing” if you can call it that. Unfortunately, singer Jay R has a polarizing and dominating voice so his vocals are a huge part of the EP and there is no way around it. If you don’t like his vocals, odds are that you won’t like Two Steps To Oblivion. I got to say that I “warm up” to Jay R‘s singing delivery every time that I listen to Two Steps To Oblivion but not enough to compel me to return voluntarily to the EP. At this point, I am only listening to it for the purpose of this review. “Gasoline Bitches” starts off with an interesting bass line and has a good underlying guitar riff to the song but again the singing just detracts from the whole song. The same pattern occurs with “Shot Of Cocaine” with a promising start before Jay R sadly butchers the song with his singing. “Moonshine Blind” is more of the same — a cool guitar riff and then Jay R opens his mouth… I will say that Jay R‘s vocals are fine when there are background vocals accompanying his singing such as the chorus portion for “Moonshine Blind.” The start of the guitar portion on the last track “All The Fucks” sounds just like the guitar part at the beginning of Motley Crue‘s “Red Hot” before a bit of Hessler‘s Comes With The Territory era riffing before well, you can surely anticipate what I will say, Jay R‘s “singing” kills any real traction that the song could have made.

If you subtract Jay R‘s vocals from the songs on Two Steps To Oblivion, I think that the songs have the potential to be really good as the music is straightforward and riff based. Unfortunately, the songs have to be evaluated and listened to as a whole. A new much better singer is essentially what Snake Bite Whisky needs for me to revisit listening to them — end of story.